A Day at Christ Church in Old City, Philadelphia

I'm taking a course on Colonial history this semester of college, and my first assignment was to visit and write about a Colonial site. Luckily I live fairly close to Philadelphia, so I had plenty of potential places to pick from! Old City seemed a natural neighborhood on which to narrow my focus, since as the name suggests it's the oldest section of Philadelphia. Because the course ends prior to the American Revolution, I eliminated the sites of Independence Mall in favor of somewhere a bit older, and landed on Christ Church. 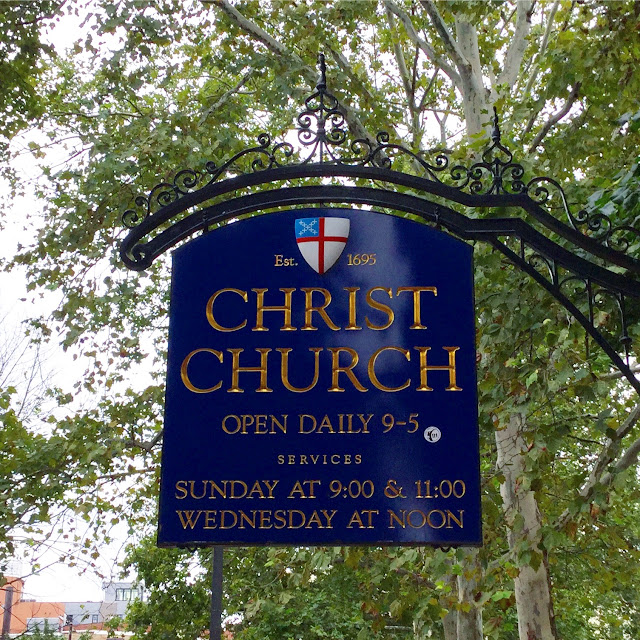 Christ Church was originally built in 1695, though the present building dates from 1744. It has remained an active church throughout its entire history, but it's open every day of the week for guided or self-guided tours. When my dad (doing duty as field trip buddy) and I arrived there were only a handful of people in the church waiting for the tour to begin, so we explored the building and its grounds on our own for a little.


Like many buildings in Old City, the church is built of red brick and enclosed by a wrought iron fence. We entered the grounds through a gate on Second Street and walked along the enclosed area parallel to Church Street, where several graves are scattered along the pavement and marked with stone slabs flush with the ground. There are more graves under the church itself, marked by engraved stones on the floor--our tour guide told us this wasn't uncommon for Anglican churches of the era. 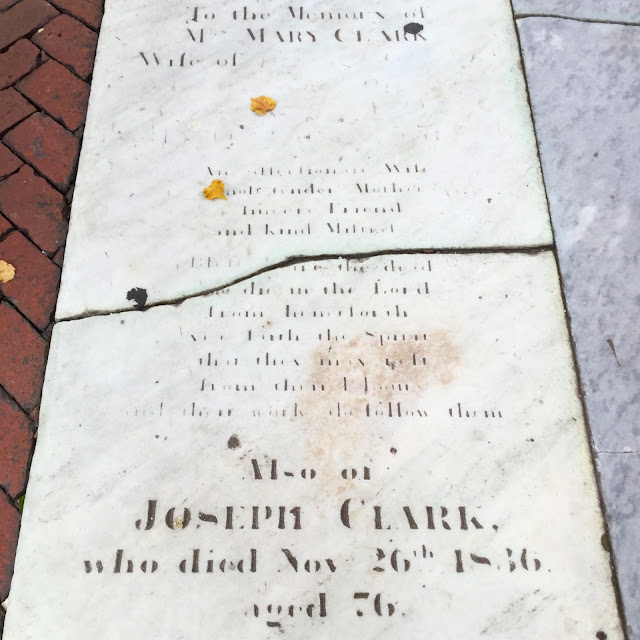 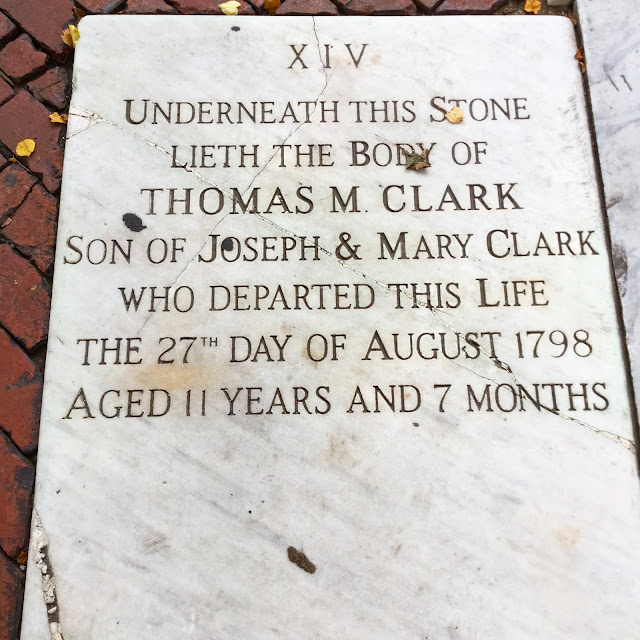 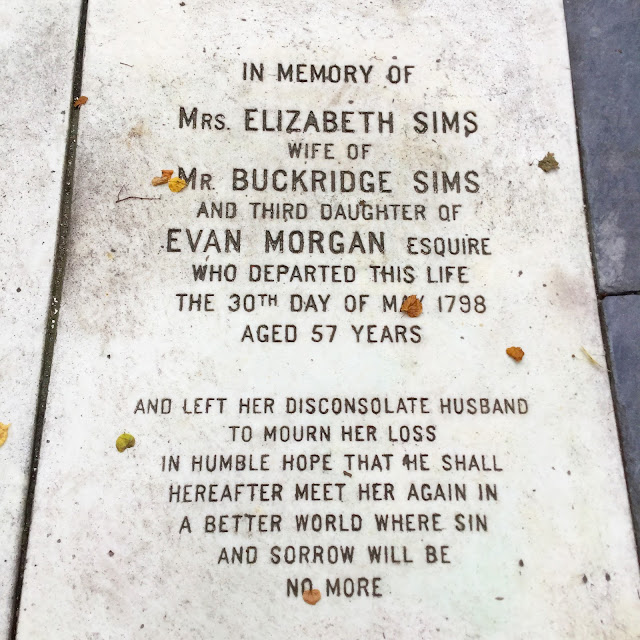 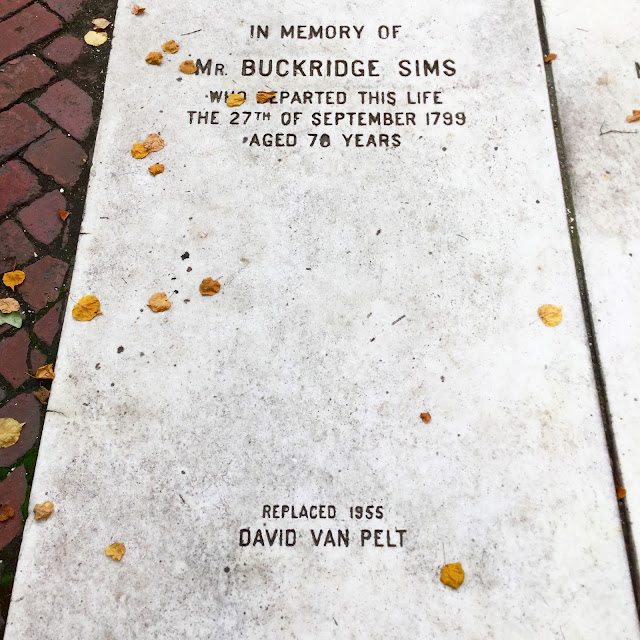 The church has a row of beautiful Georgian windows along Church Street, and an enormous one facing Second Street behind the pulpit--all clear glass instead of stained to reflect the Enlightenment belief that the outside world posed no threat to the spiritual world, according to our tour guide. The windows and the pulpit date from the eighteenth century, but various other fixtures have been replaced over time, reflecting the longevity of the congregation. The pews were replaced in the nineteenth century, though the church map still marks where notable Founding Fathers would have sat. 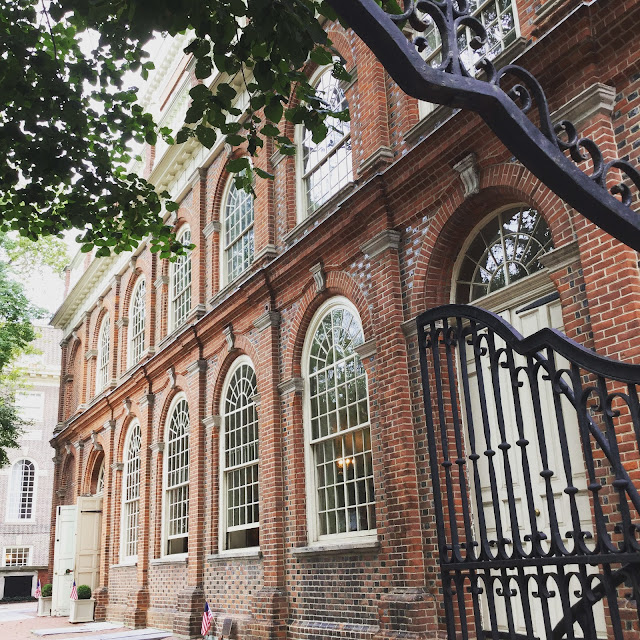 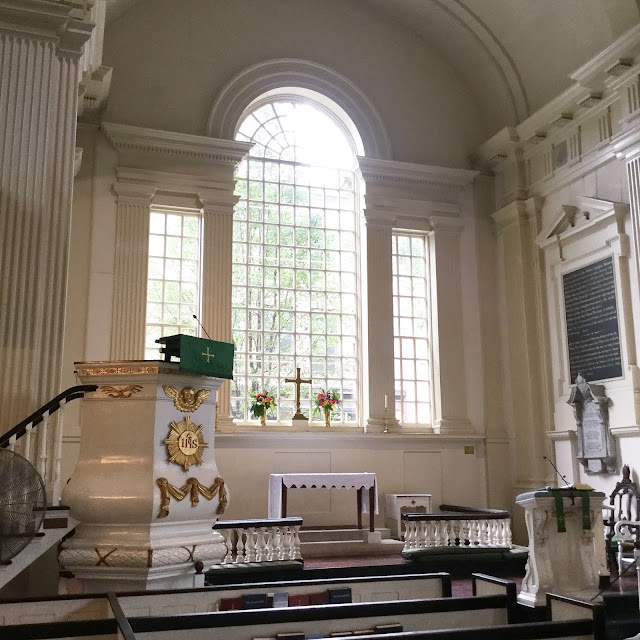 We sat in one of the pews while the tour guide gave a talk about the church's history, and shortly after he began speaking our small group was joined by twenty or so people on a larger guided tour. Just as we were leaving after the tour concluded, an even larger group was pouring in, so it seemed we had timed our arrival and departure just perfectly!


Visitors enter and exit the church through the tower room, where stairs lead to the organ, choir loft, belfry, and gallery. The room itself serves as a gift shop, and I purchased a souvenir guide map and history booklet to assist me in my paper writing. Then we got directions from the cashier to the Christ Church burial ground, which is situated a few blocks away at the corner of Fifth and Arch Streets. 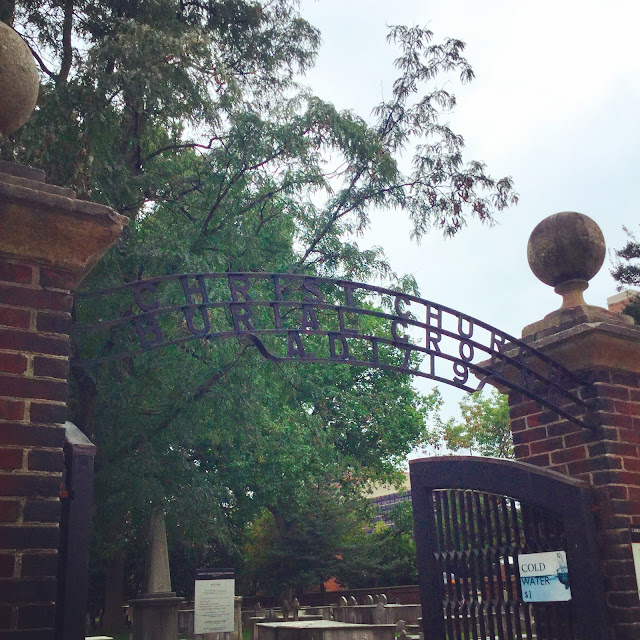 Like the church, the burial ground is bordered by a wrought iron fence. Unlike the church, the burial ground was nearly empty of visitors--there were only a couple of other people who had paid the three dollar entrance fee to come inside, and a handful of people on a tour looking in from outside the fence. We followed a path winding through the graves and the old, shady trees, though it petered out in parts. 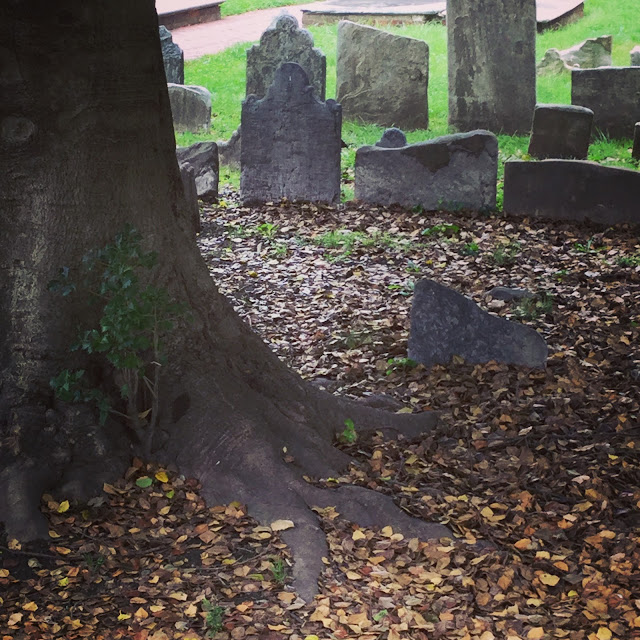 In some areas the graves are ordered neatly in rows, and in others they are more haphazard. Many have partially sunken into the ground, while others are cracked and broken. 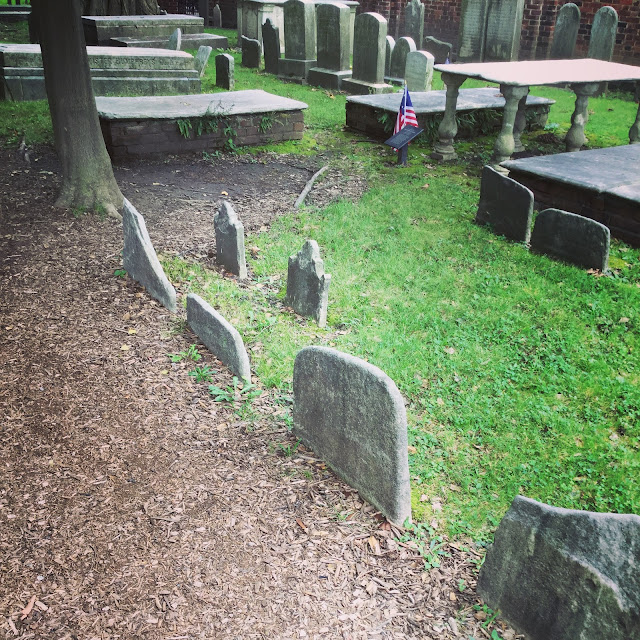 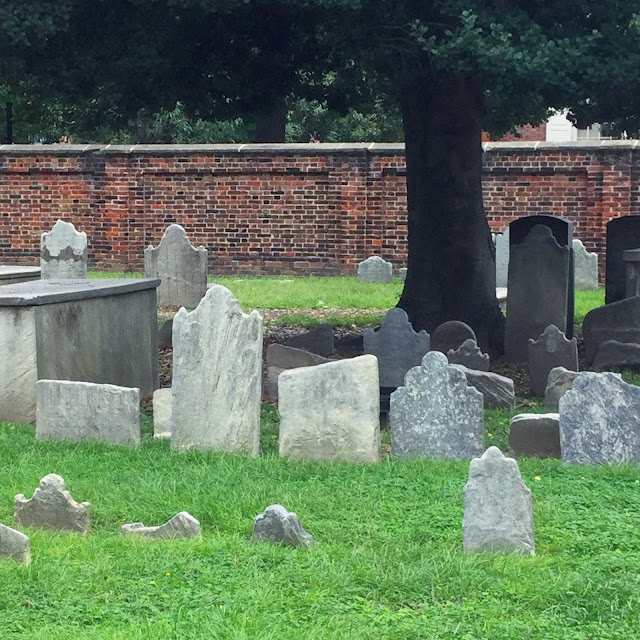 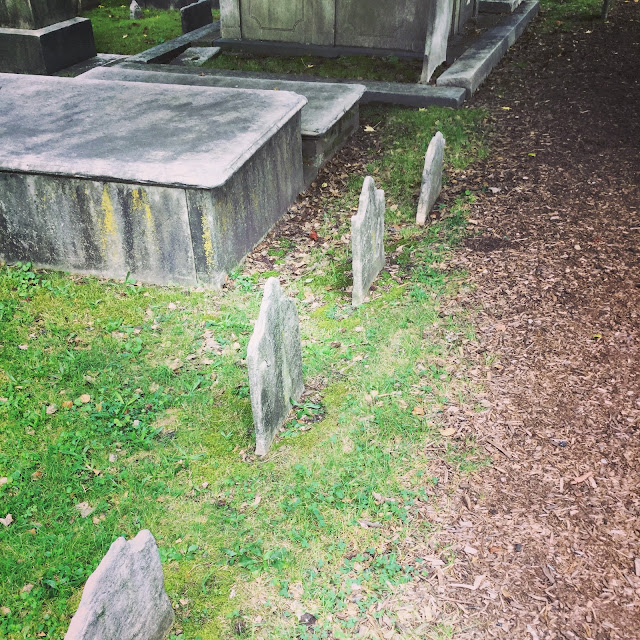 The markers are a mix of simple headstones, raised tomb-like structures, and obelisk monuments. The inscriptions have worn away on most of the oldest stones, which date from the eighteenth century. The newest grave I saw was that of a man who died in 1991, and his wife's grave next to it still awaits its occupant. (I took a photo, but won't share it here for their privacy.) 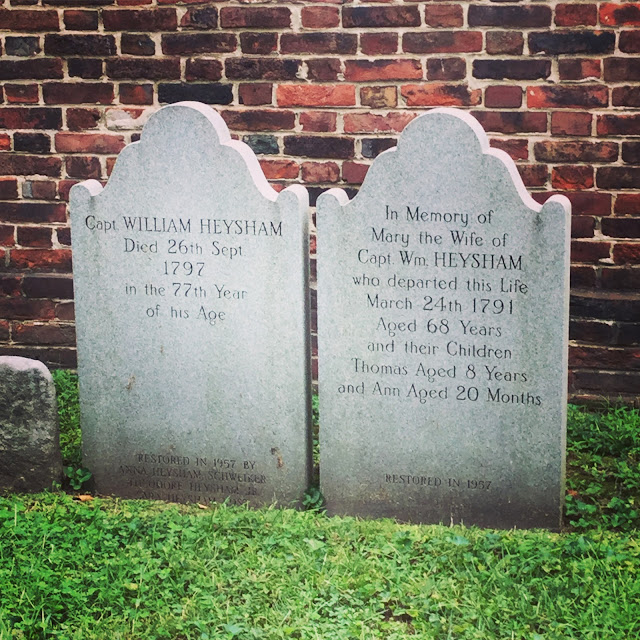 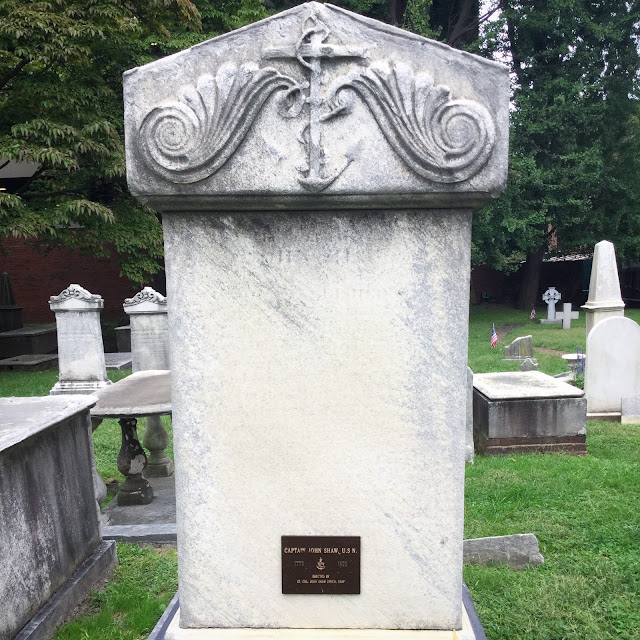 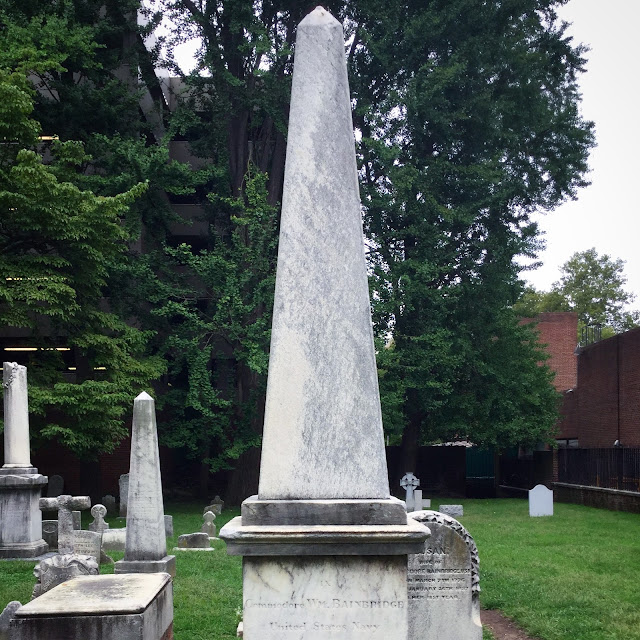 The most famous grave in the burial ground is that of Benjamin Franklin. Conveniently for the tour group outside the fence, Franklin's grave is located on one of the outer corners near the sidewalk. The visitors tossed pennies onto the grave, apparently in homage to Franklin's saying, "A penny saved is a penny earned." We didn't give Franklin any monetary offerings, since I figured our admission fee was worth significantly more. 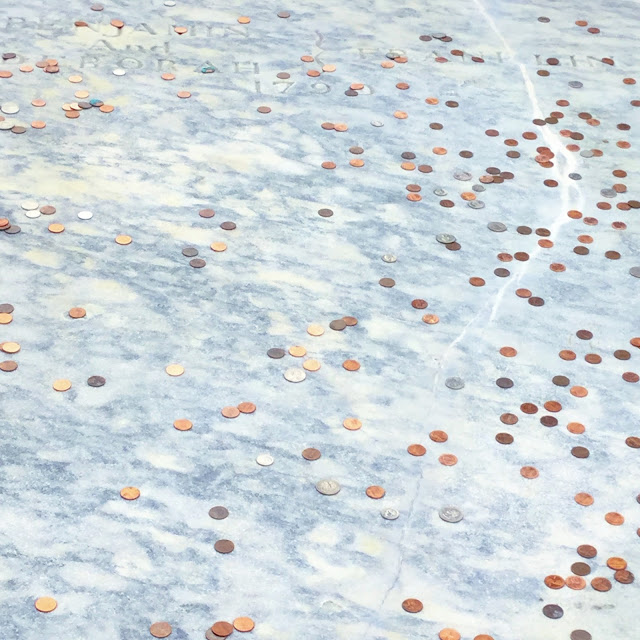 The burial ground had a somewhat otherworldly atmosphere yet wasn't particularly spooky; just a bit strangely quiet and green for a plot of land in the middle of a busy city neighborhood. The church runs a guided evening tour of the burial ground on Fridays through the middle of November, and if I get the chance I'd like to come back for one and see if the atmosphere is different a little later in the day--or closer to Halloween! Besides, there was so much to see at Christ Church that I didn't get a chance to photograph, so a general return visit might just be in order.


(One final note on the photos I did get: I used my iPod instead of my regular digital camera and edited these shots in Instagram, and used filters on most of the burial ground photos to convey a sense of atmosphere. The end result is a little experimental, and the quality a bit inconsistent, which I hope wasn't too distracting!)