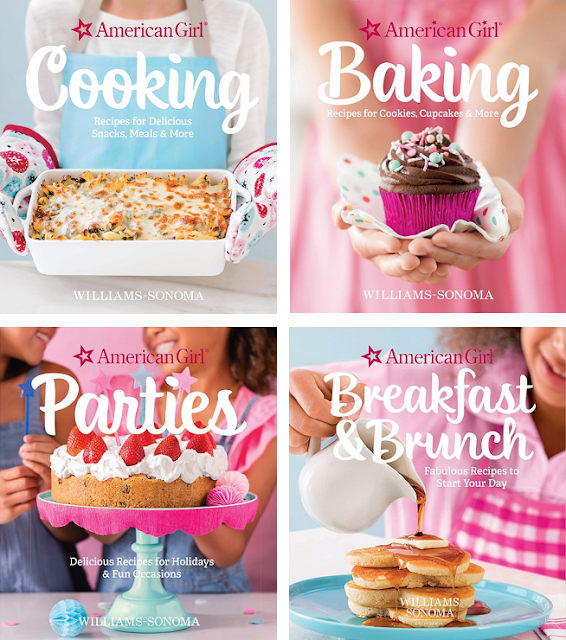 The first cookbook I ever owned was Great Girl Food, published in 1996 as part of the American Girl Library line of books. Divided into sections for breakfast, lunch, dinner, snacks, and holidays, it offered a mix of simple recipes that children could make with a bit of help from adults and some snack and meal ideas to assemble from ready-made components. While some of the recipes and ingredients seem dated today (there's an alarming amount of artificially-colored substances at play in some recipes), a few have actually become standbys that I still use with some variation.

Over the years I expanded my American Girl cookbook collection to include their historically-inspired and party-themed offerings, and even as an adult I still turn to them on a regular basis for their surprisingly useful recipes. So when I saw that American Girl had partnered with another of my favorite cookbook publishers, Williams-Sonoma, to produce a new cookbook series, I was excited to see what they had to offer. I now own all four volumes: Cooking, Baking, Parties, and Breakfast & Brunch, and so far I've been pretty impressed.

Each volume of the series pretty much does what it says on the cover. Cooking focuses on light meals, lunches, and dinners with chapters on snacks, soups and salads, main dishes, and side dishes. Baking offers dessert recipes divided by type, including cookies, cupcakes, and a miscellaneous section of bars, tarts, fruit desserts, and more. Parties presents eight themed party ideas, most with a holiday or seasonal focus, with two-page spreads of simple decorating and favor suggestions followed by complete recipes for each party menu. Breakfast and Brunch essentially covers the two areas left out of Cooking and Baking with egg dishes, muffins, and other morning fare sorted into chapters for basics, sweets, healthy options, eggs, dishes for entertaining, and sides and toppings. All four books also have basic cooking and baking instructions and safety tips at the beginning, since they're aimed at children.

What I really like about all four volumes is that the recipes are fresh and different while still easy to make and palatable to those who aren't particularly adventurous eaters. For example, Baking has a recipe for "Black Bottom Cupcakes" where you spoon a simple cheesecake mixture into a basic chocolate cupcake recipe, putting an unusual spin on two standard desserts. Parties has a brunch gathering that includes a suggestion for frozen yogurt pops covered in granola, a light and healthy take on novelty ice cream bars that works really well for a summer morning treat. It's little twists like these that elevate the recipes in all four books from just kids' basics to interesting ideas anyone can enjoy.

So far I've made the "Cherry Crisp," "Lemon Cupcakes," and "Cheesecake Cupcakes" from Baking, and I've had good results with them all. Like all American Girl recipes I've tried, they're easy to follow and don't require a lot of ingredients or complicated techniques. They're also not overly rich or sweet, although there is room to cut back a little on the butter and sugar in some of the recipes if you prefer. I'll also note that while there are plenty of vegetarian recipes in all four books, there are very few vegan recipes, so those who avoid eggs and dairy probably won't find them particularly useful. But if you're like me and just want some new recipes to incorporate into your everyday cooking and baking repertoire, the American Girl and Williams-Sonoma Series would be a great addition to your cookbook shelf.