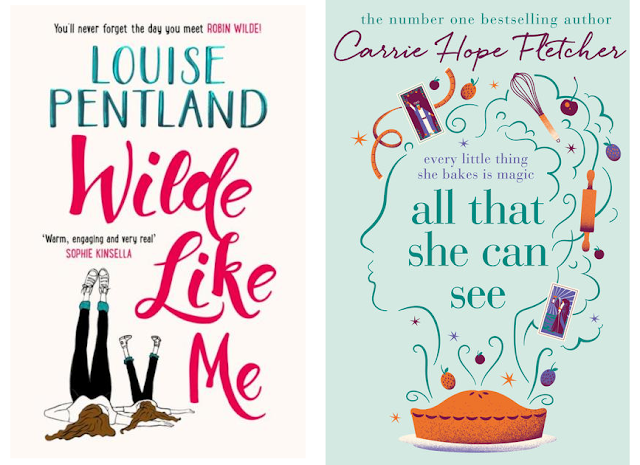 Two YouTube vloggers I follow, Louise Pentland and Carrie Hope Fletcher, are releasing novels this summer. While I most likely won't read these books since they're in a genre I don't typically enjoy, I've been interested in the behind-the-scenes glimpses of their paths to publication that Louise's and Carrie's YouTube videos offer. In particular, it was refreshing to hear Louise open up about the advantages of getting a book published when you have an established audience in her recent video, "I Got a Fast Tracked Book Deal??".

With both Carrie's first fiction book released last year and Louise's fiction debut this year, I was struck not only by the edge that YouTubers have in getting published but how different the process is from submitting as an unknown author. Both Carrie and Louise had released non-fiction books prior to making their fiction debuts, and both followed a procedure more typical of non-fiction when submitting their novels: they each wrote a book proposal, which outlined major characters and plot points, and submitted it to publishers. After their proposals were accepted and publishing deals reached, they wrote their respective novels. (Carrie talks about her journey to publication here.)

This isn't how submitting fiction to publishers typically works. Instead of writing a proposal, an author will write what's called a query letter--essentially a business letter that conveys the genre, word count, and plot of their book along with some background information about the writer. Writers can send query letters directly to editors at publishing houses if those editors accept them, but most editors only accept submissions from literary agents. So, most writers send their query letters to literary agents instead. (To note for comparison, Carrie has a literary agent, while I gather from Louise's video that her manager acted in the capacity of an agent in the case of her novel.)

If a literary agent is intrigued by a writer's query letter, they'll request part or all of the manuscript to read. If they like what they've read and think there's a market for the book, they'll offer to represent the writer. After that, the agent will submit the book to editors at publishing houses, and hopefully reach a publishing deal. The agent will earn a percentage of what the publishing house pays the writer, so it's in the agent's best interest to get the best deal possible for their client.

All of this brings me to what I think is the most crucial and overlooked difference between how YouTubers write novels and how unknown writers do: unknown writers have to finish writing their books BEFORE submitting them for publication. It's hard to persevere with a writing project when you have no idea if it'll ever actually be published, and YouTubers who have book deals in place prior to writing their books don't have to deal with this uncertainty. So it's not just a matter, as Louise puts it in her video, of many people vying for the attention of publishers with just an idea for a book--it's a matter of having that idea, writing a manuscript tens of thousands of words long, revising the manuscript until it's the best it can possibly be, submitting it to agents, and then vying for the attention of publishers with a complete and polished manuscript in hand. Bypassing this process is truly, in my opinion, the biggest advantage that YouTubers have--and since they have no experience of the traditional path of publication, they might not even be aware that they have it.