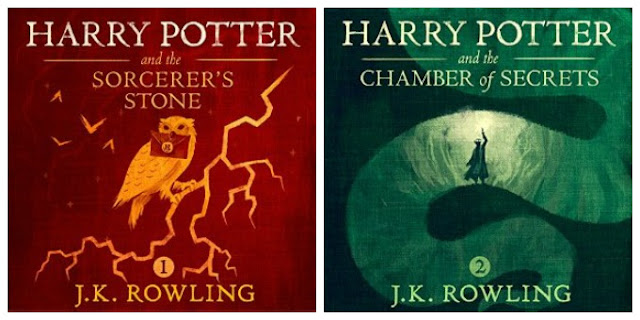 A little over a year ago, my mother surprised me with the complete set of Harry Potter audiobooks using some extra credits from our family Audible subscription. While I've seen the movie adaptations several times each, I've actually only read the first books perhaps twice, and most of the series just once. So far I've finished listening to Sorcerer's Stone and Chamber of Secrets, and I've been struck by the changes made from book to film--and by some plot holes I didn't recognize when reading the books as a tween. Here are a few from Books 1 & 2 that really stood out to me:

The friendship of the famous trio--Harry, Ron, and Hermione--is cemented in Socerer's Stone when they tackle a rogue mountain troll together in a Hogwarts bathroom. This takes place on the night of the Halloween feast, but Hermione isn't in the Great Hall with the rest of the Hogwarts students--she's alone crying in a bathroom over a hurtful comment Ron made about her, as Harry and Ron hear from a classmate. Since Hermione is absent from the feast, she doesn't hear the announcement about the troll that's found loose in the school, so Harry and Ron go to warn her. Instead, they find the troll in the very bathroom where Hermione was hiding out, and the three manage to knock it unconscious just before Professor McGonagall and a couple of other teachers arrive on the scene.

Now, Harry and Ron could have told a teacher that Hermione was in the bathroom instead of going to alert her themselves, but they both have a tendency to act without thinking and have an inherent distrust of authority, so I can believe they'd take matters into their own hands. But what I cannot believe is that Hermione would tell Professor McGonagall that she had deliberately gone looking for the troll. This lie costs her house points, whereas telling the truth--that she had simply been in the bathroom--presumably would have brought no punishment. No one would have suspected that she was doing anything but using the facilities, so she would have no reason to fear her private issues becoming public. And while lying makes Hermione seem "cool" to Ron and Harry, I doubt that an eleven-year-old girl who had just been through a dangerous situation would be able to make such a calculated bid for popularity in a split-second decision, especially since her natural tendency is to be truthful and rule-abiding.

Book 1: The Hogwarts Teachers and the Perplexing Security Measures

In the first book, the legendary Philosopher's Stone is hidden away at Hogwarts to keep it safe from the dark wizard Voldemort. (It was renamed the "Sorcerer's Stone" in the American edition because Americans, apparently, are idiots.) Each of the Hogwarts professors contributes a layer of magical security, but here's the thing: not only are all of the security measures but the last set up to be potentially solvable by anyone who might come across them, all of them are solved by three eleven-year-old students in their first year of magical study. Why would you give a would-be thief this kind of help? For goodness sake, Snape's potion logic puzzle even comes with a cheat sheet of hints! Just put out all the potions and make the person choose wisely, Indiana Jones and the Last Crusade style.

Or, you know, just use Dumbledore's Mirror of Erised protection, which prevents anyone who wanted to use the stone from finding it. Seriously, why bother with the giant dog and live chess game and all that other nonsense when you have one perfect, elegant solution?

Book 2: Harry and Ron and the Inexplicable Change of Plan

In Chamber of Secrets, Hogwarts students are being petrified (frozen in a coma) and no one can figure out who or what is attacking them. No one, that is, except Harry and Ron, who obtain crucial information about the attacks from a library book page crumpled up in a petrified Hermione's hand. Since Dumbledore has been suspended through political meddling, Harry and Ron decide to take this information directly to acting-headmistress Professor McGonagall. They're waiting in the staff room for McGonagall to return from a class when they hear her in the corridor, telling the other professors that there's been another attack.

Overhearing McGonagall's announcement makes it all the more critical for Harry and Ron to tell her what they know. But--for no good reason whatsoever--they decide to hide in the closet and eavesdrop instead. Then they hear that Ron's sister Ginny is the latest victim, and that she's likely dead.

I can understand that Ron and Harry, once they make their entirely inexplicable change of plan, might be in shock after hearing about Ginny. So perhaps it might take a little time for them to resume action. But when Ron does rally enough to realize that if there's the slightest chance Ginny can be saved, they have to do something, does he bring his information to McGonagall? No. He and Harry go to Professor Gilderoy Lockhart, whom they overheard agreeing to look for Ginny.

Harry and Ron have known the entire year that Lockhart's an idiot, so they have no reason to believe that he'll actually be of any use in saving Ginny. Why they don't go to McGonagall with their information as originally planned is beyond me--just as why they didn't stick around in the staff room to tell McGonagall what they knew in the first place is beyond me.