A Christmas Outing in Miniature

This weekend, my dad and I took a day trip to a shore town not too far away to do a little Christmas shopping and some holiday sightseeing. While our own shore town is rather quiet at the holidays, this one is a much bigger tourist destination, and they had lots going on for Christmas. In fact, it was a lot more crowded than I expected it would be, and while the hustle and bustle was festive it was also a little overwhelming! We couldn't even move in the town's Christmas shop, and decided to forgo a sit-down lunch when our chosen restaurant had a 30-minute wait and opted for grilled cheese, chips, and cinnamon-cider doughnuts at a coffee and sandwich shop instead.

Still, we found some peace and quiet at the main attraction I wanted to see: an exhibition of miniature houses and figurines from Department 56's Dickens' Village line. We have a small collection from the line at home and have displayed our own mini Dickens' Village every year for as long as I can remember, and I've shared a few photos of it on the blog. I love taking close-up pictures of the miniature world to make it look almost real, so I loaded up my camera's memory card during our visit to the exhibition! Below, you can see some of my favorite shots.

The houses in the exhibition were arranged on a round table in concentric rings, two tiers high. The photo below gives an idea of the arrangement, and features a house my family actually owns--the Crachits' cottage: 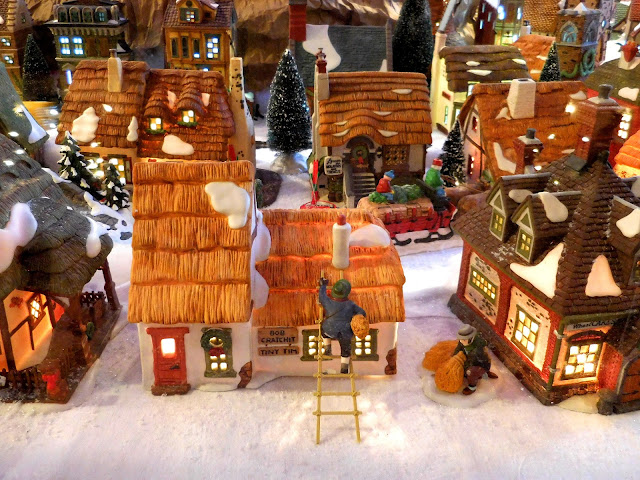 A moving toy train ran around the perimeter of the display, and there were several train stations set up in the outermost ring of buildings. They were difficult to photograph because I had to aim my camera through the plexiglass barrier, but I couldn't resist sharing this imperfect shot of Victoria Station with the gentleman holding the teddy bear. It's so cute, a suggests a whole little story: 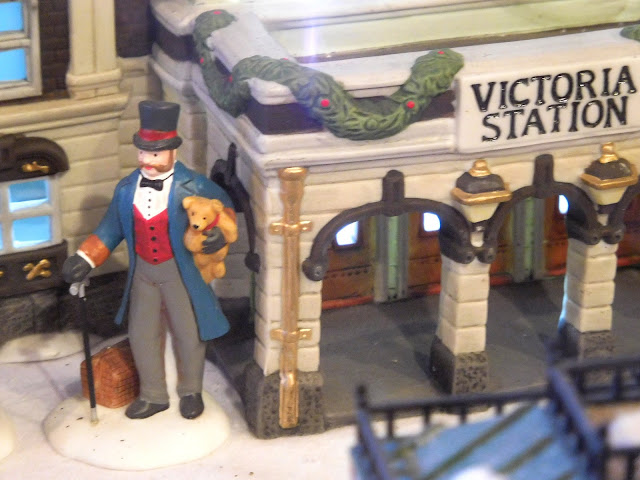 This couple on a bench was seated outside another of the train stations: 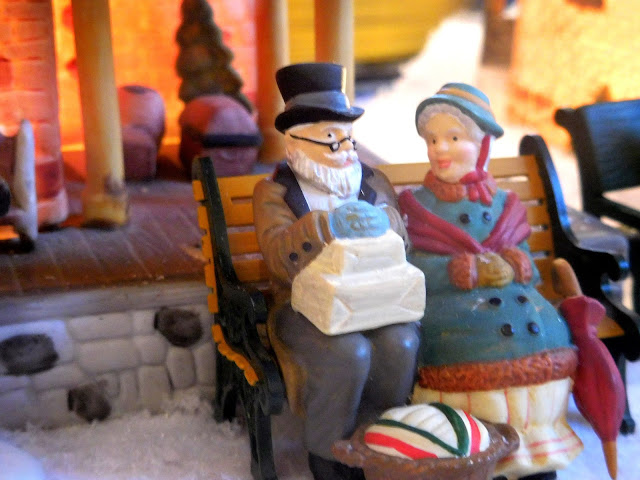 There were lots of little festive vignettes tucked around the display, like this mummers' procession: 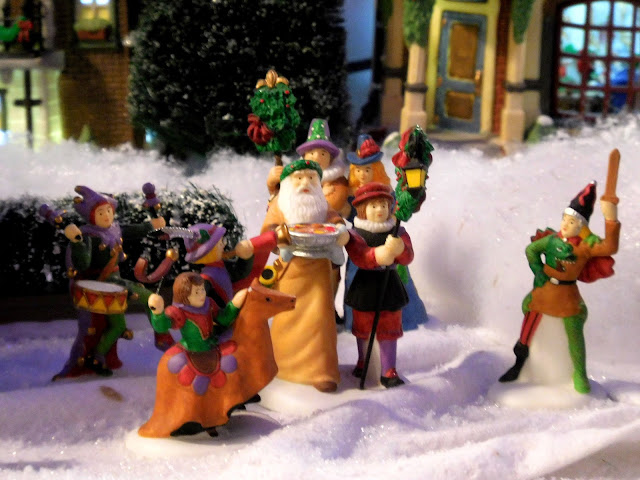 This group of musicians was giving a Christmas concert by a gazebo: 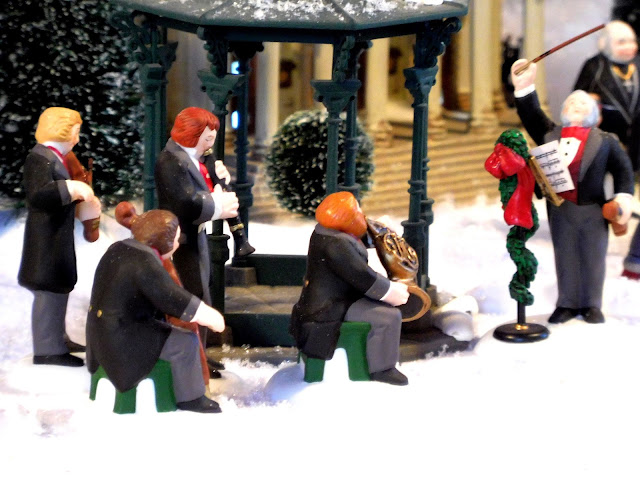 And these children were getting candles and lanterns ready for something--perhaps a procession or Christmas service?--outside a church: 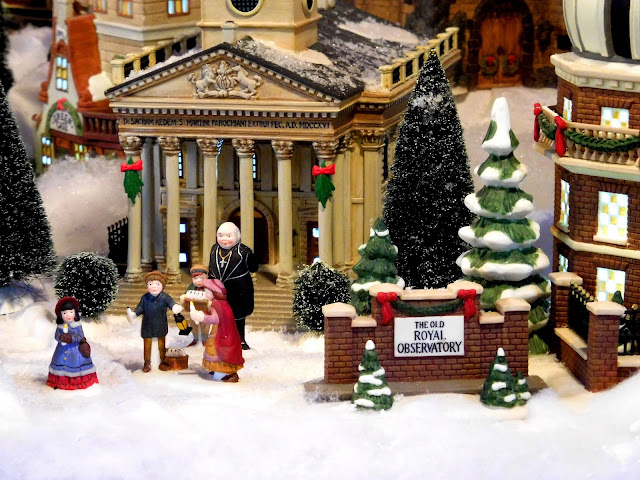 Of course, there were many street scenes of shoppers, salesmen, and people generally walking about. I think the gentleman tipping his hat could be Scrooge himself on Christmas morning, and the boy might be Tiny Tim--it's hard to make out, but I think he has a crutch tucked under his arm: 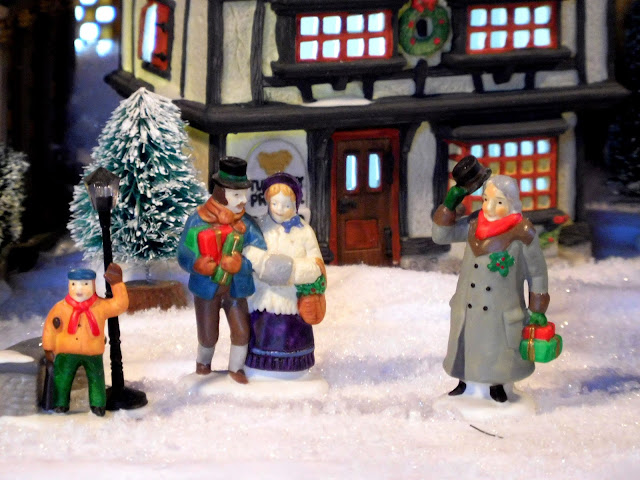 This family group looked cheery outside the inn decorated with wreaths: 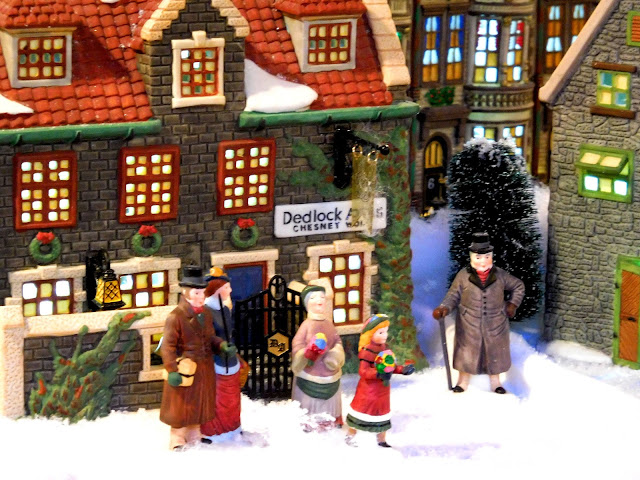 Finally, here are my favorite two shots. I love how this picture of the couple under the snow-spotted umbrella turned out--I didn't even see that there was a lady next to the gentleman until I looked at the photo! 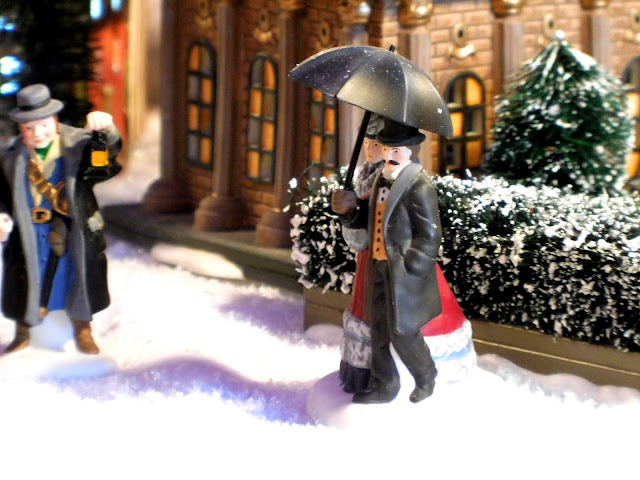 And I think this scene of the man selling fresh Christmas greens and the children playing with hoops outside three buildings decorated for the season is one of the most Christmassy of them all: 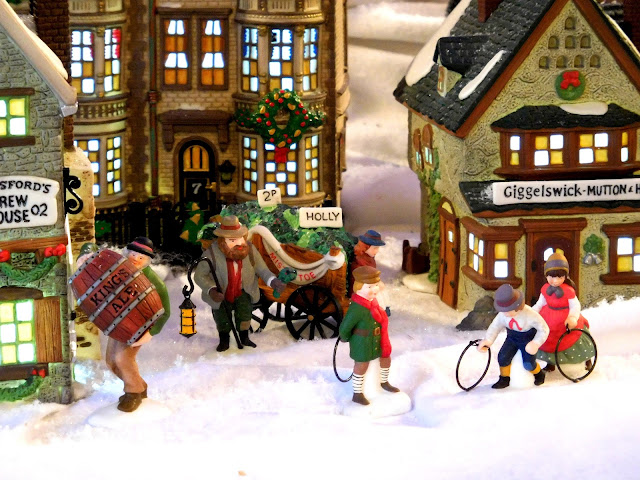 It would be nice to be able to visit a real snowy, picturesque Victorian village for Christmas, but this visit in miniature will have to do for me!