I toyed with a few different themes for my birthday celebration this year, but fairly quickly settled on a gathering inspired by a lifelong favorite character: A. A. Milne's Winnie-the-Pooh. Since it was my 26th birthday and Winnie-the-Pooh was published in 1926, it seemed a fitting year to take my cue from the silly old bear and his adventures in the Hundred Acre Wood.

For this year's cake, I settled on banana cupcakes frosted with chocolate-hazelnut spread, which seemed both vintage and forest-y. Since the brand of organic chocolate-hazelnut spread I used tends to be a bit soft when room temperature, I stuck the jar in the fridge for an hour before frosting the cupcakes to make it easier to work with. Once frosted, I topped the cupcakes with natural colored sprinkles and flag picks made using Classic Pooh scrapbook paper and glitter scrapbook paper. 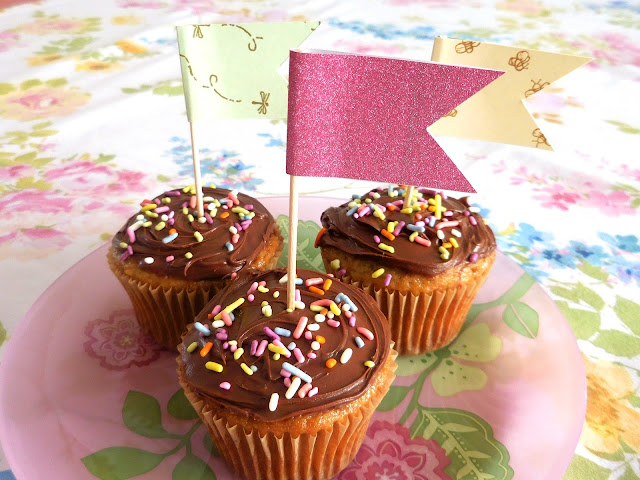 For my past two birthdays my family and I have played a game of Monopoly, but this year I wanted the activity to fit the party theme. So, I decided to craft my own Winnie-the-Pooh version of Monopoly. I designed the four board pieces in Microsoft Paint, replacing the standard street names with place names from the Pooh books and incorporating E. H. Shepard's illustrations on various spaces where appropriate. 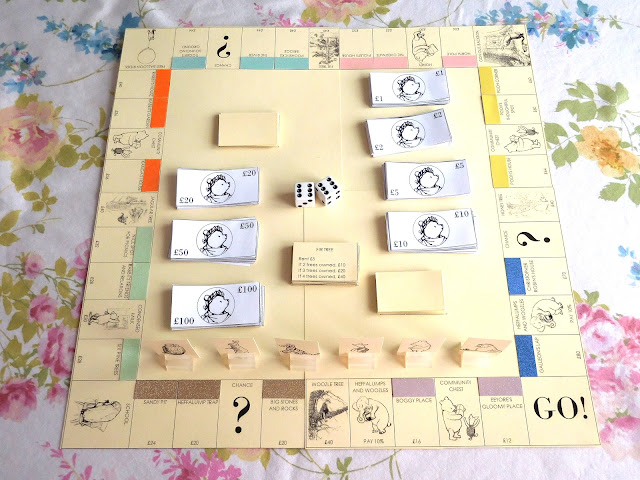 The cheapest property became Eeyore's Gloomy Spot, and the Boardwalk became Galleon's Lap. The railroads became trees in the forest, the utilities were swapped for Condensed Milk and Honey, taxes transformed into thieving Heffalumps and Woozles, and jail became--what else?--school. I also created new, Pooh-ish versions of the Chance and Community Chest cards. 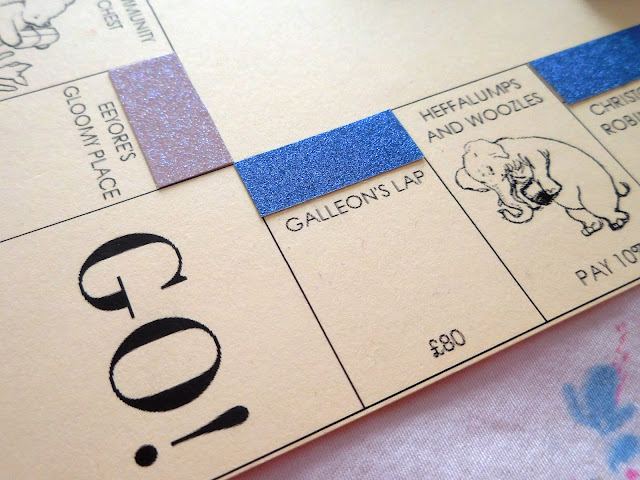 I got particularly nerdy when pricing the properties and not only changed the currency to British pounds, but did so using the exchange rate from the year that Monopoly came out. To streamline things, I eliminated houses, hotels, and mortgages from play and simply calculated rents that increased depending on how many properties in a group a player owns. I printed special Pooh pounds using an illustration from the Latin translation of Winnie-the-Pooh, eliminating the denomination of 500 and adding a denomination of 2 since many of the new prices became multiples of 2 and not 5. (Forgive the pixelated appearance--I don't know why they printed like that!) 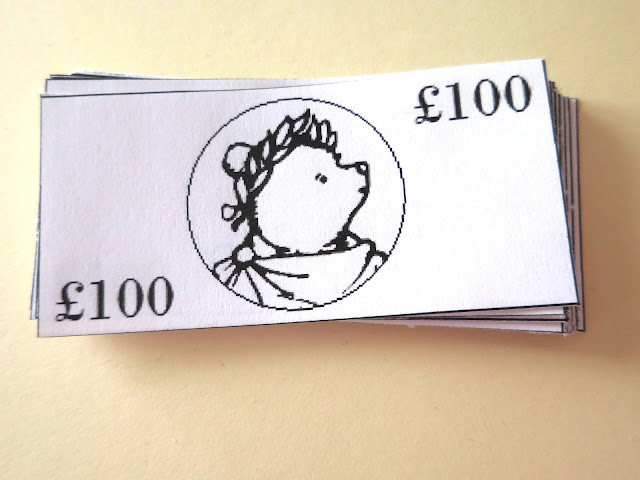 Once the board pieces were printed I trimmed them, taped them together, and added strips of glitter paper to mark the property colors--plain colored paper would have worked too, but I only had enough colors of glitter paper on hand! I also printed illustrations of Pooh, Piglet, Eeyore, Tigger, Rabbit, and Owl to serve as tokens and used plastic stands from a different board game to prop them up. The game worked perfectly and we all enjoyed it even more than regular Monopoly! 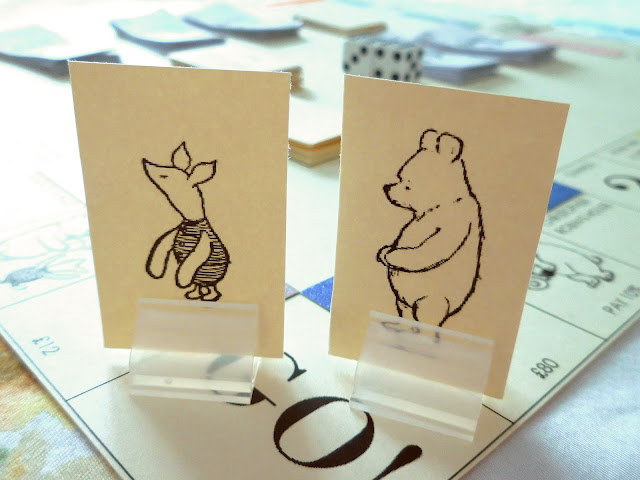 As usual, I got together a couple of small party favors for my mother and sister since they don't eat the cake due to dietary restrictions. This year I ordered some mini Pooh quote/advice books and paired them with a small set of homemade note cards designed to look like custom letter paper for Pooh, Piglet, Tigger, and Owl. Each card has "FROM THE DESK OF" at the top with an illustration and signature of each character beneath, followed by a quote from that character related to communication at the bottom of the card. 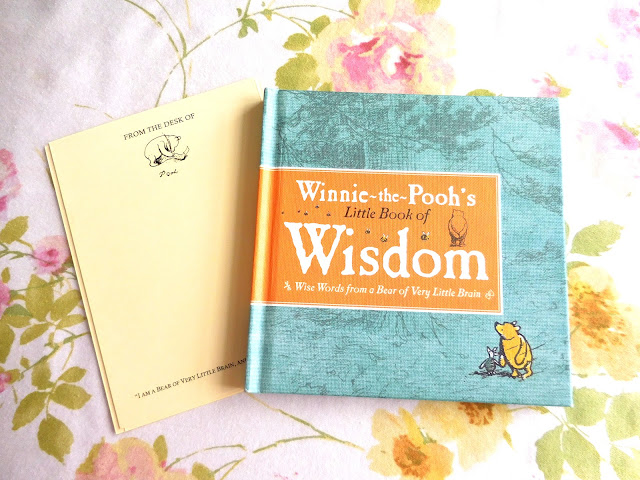 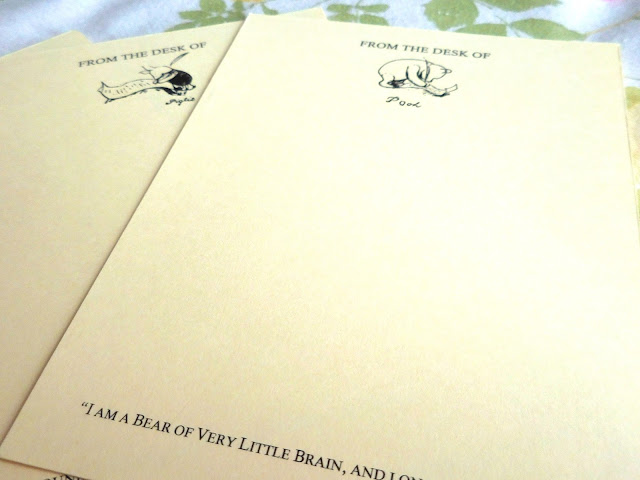 We rounded out the day with a viewing of The Many Adventures of Winnie-the-Pooh, which was one of my favorite things to watch when I was very young and still holds a special place in my heart today. I thought the celebration turned out very nicely overall and I had a lovely day, with lots of thoughtful presents from my family--I'll be doing a separate birthday present post later this month, so check back soon if you're interested!