When I was a teenager, I received a special 80th anniversary deluxe edition of A. A. Milne's Winnie the Pooh as a Christmas present. Winnie the Pooh holds a special place in my heart and I have a weakness for gorgeous books, so I absolutely adored this edition with its matte cream pages, beautifully colorized artwork, and windowpane toile jacket. I wanted to collect the matching editions of The House at Pooh Corner and Milne's children's poetry books When We Were Very Young and Now We Are Six, but before I had a chance the publisher put out new deluxe editions of all four books with glossy, bright white pages and differently colored artwork. Since I much preferred the earlier deluxe version of Winnie the Pooh, I turned to the internet in the hopes of completing my collection.

Searching for these particular editions turned out to be more complicated than I had anticipated, since the publisher released the new deluxe editions with the same ISBNs as the originals. As many online used booksellers list their titles by ISBN and use automatically-generated images and descriptions, it was often impossible to tell from online listings which version of these books were for sale. Eventually in 2011 I managed to track down my sought-for edition of The House at Pooh Corner, but When We Were Very Young and Now We Are Six remained elusive.

Over the years I've made periodic searches on AbeBooks and eBay, looking for sellers who uploaded their own photographs so I could be certain of the edition for sale. Serendipity seemed to strike this summer when I found good copies of both books online with actual photographs, but unfortunately my purchased copy of When We Were Very Young got lost en route from the United Kingdom. As the autumn progressed with no further luck, I began to fear that my collection would remain only 3/4 complete.

However, I finally managed to round out my collection this week after taking a chance on a promising listing. It didn't have a seller-uploaded photograph, but it did indicate that the copy was a stated first American edition. This was a crucial clue I had overlooked in previous searches--while the original editions say "First American Edition" inside, the newer versions simply say "First Edition." When the book arrived, I was thrilled to find that it was the edition I'd been searching so long for. Now all four books stand side-by-side on the top shelf of my bookshelf, looking pretty and matching perfectly! 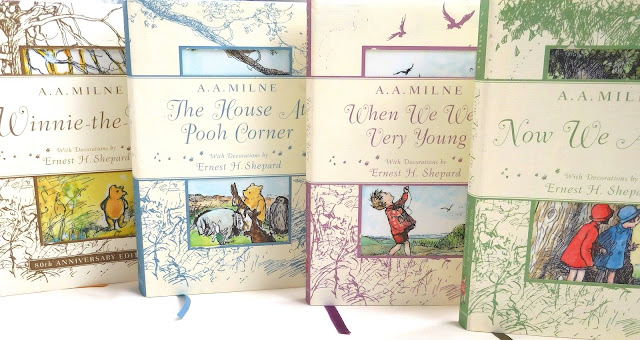