When planning our family garden this year, I stuck to two rules for plant selection: first, no deadheading; and second, flexible watering requirements. It was a lot trickier to care for our greatly-expanded garden last summer, so I wanted to pick the least fussy flowers possible this year. Despite taking a risk on a couple of new varieties, everything grew beautifully, and I thought I'd share some photographs of the results.

For the past couple of years we've planted Mexican heather by our front walkway, which has always done well. This year, however, we wanted to pick something different, as we decided to plant some lavender elsewhere in the garden and the Mexican heather is rather similar in shape and color. I spotted these annuals called pentas at the local garden center, and even though they were totally new to me they sounded easy enough to care for. They turned out to be a breeze to grow, and I love the bright clusters of star-shaped flowers--the look is similar to miniature hydrangeas or geraniums, but the spent blossoms fall right off without fading. We went for pink by the walkway and another patch of purple by our driveway: 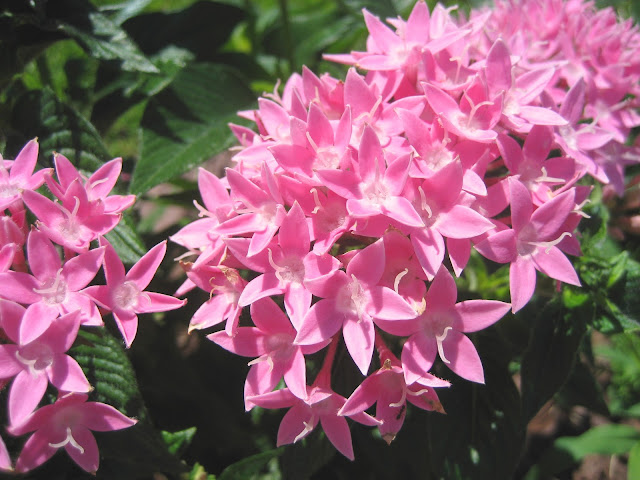 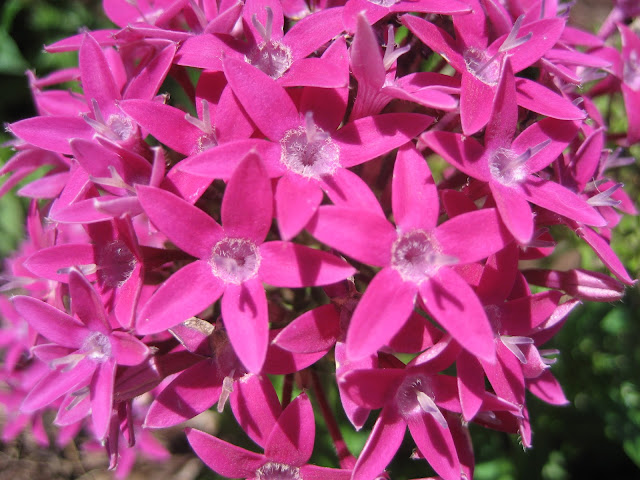 In the pots on our front steps we picked portulaca and torenia. The yellow portulaca were the variety with rounded leaves that trail somewhat, and they've been lush and full of blossoms all summer. I've had mixed success with torenia in the past, but I took a risk on it again this year since I couldn't resist this pink variety. It had a bit of a slow start but rebounded with masses of blooms after a trimming. I particularly liked these two close-up shots of the portulaca and torenia: 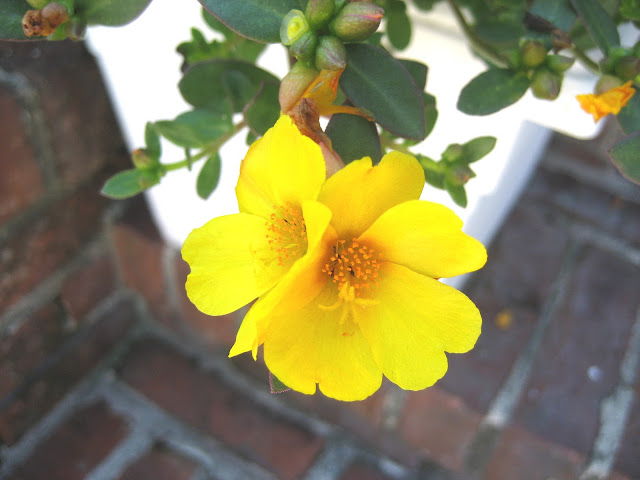 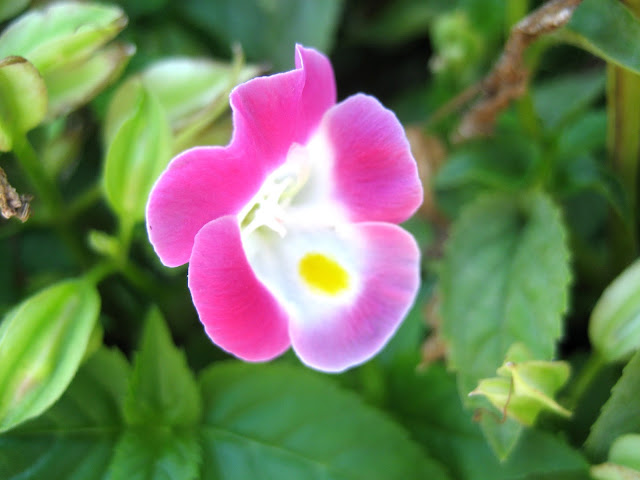 We planted a boxwood in our shrubbery bed last year and while it's growing well, it's still on the small side. To add some oomph to that corner, we planted coleus in front of it. The bright green in the leaves complement the color of the boxwood's new growth perfectly, and I was surprised to find stalks of blue flowers springing up from the plant in mid-July. Apparently most people cut them off, but I think they're kind of pretty, so I left them: 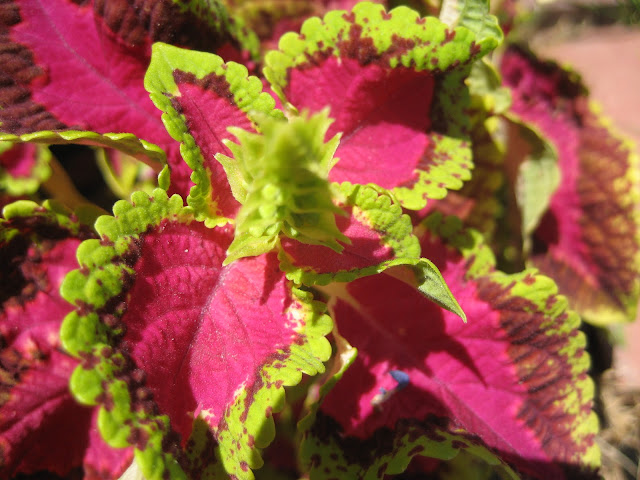 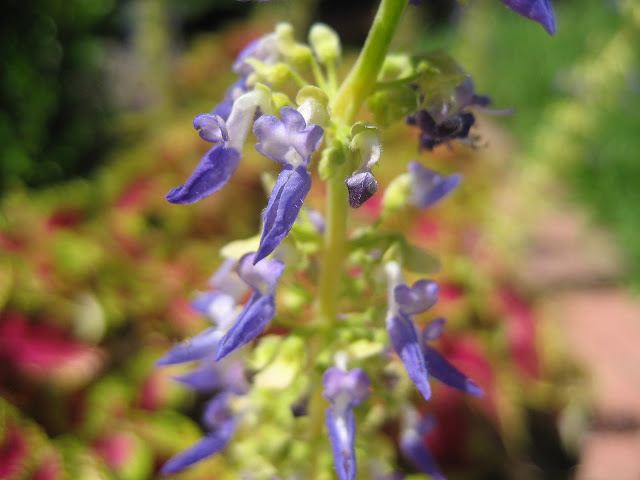 In another small space in the shrubbery bed, we planted vinca with white blossoms with bright pink centers. In years past we would have chosen impatiens, but unfortunately the blight of downy mildew is still going strong, so I'm not sure when--if ever--we'll be able to bring impatiens back to our garden. Still, I really liked this particular color combination in the vinca, and I love a pop of white flowers in the garden: 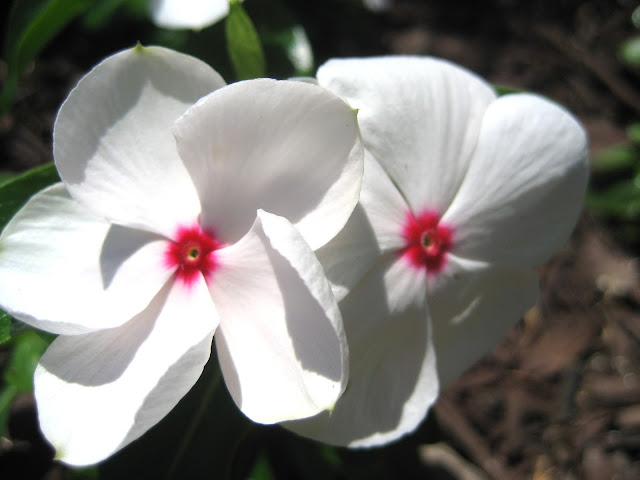 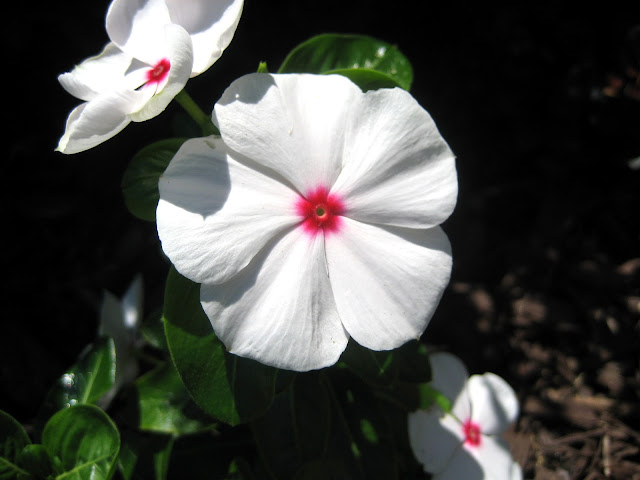 I mentioned earlier that we decided to plant lavender in the garden this year. We've decided to switch one of our beds a year over to perennial plants to make our summer planting sessions a little easier, so we settled on a mass of lavender in our biggest flower bed. We chose Munstead English lavender, which is a dwarf variety that will work well in our space. It grew surprisingly quickly and I was thrilled to see it bloom in its first year, but we did lose three of our plants to root rot. Our soil is sandy and normally drains well so I think the issue came from a couple of heavy rains that flooded that part of the garden early in the season. Hopefully the others will continue to thrive--unfortunately I missed the peak blooming period for photographs, but I'll try to get some pictures next year for 2016's summer garden post!