Every year I try to expand the Christmas decorations in my room a bit and create a holiday look that coordinates with my color scheme and style. Last year I created a paper pennant banner--the first one I ever made actually, and the project that inspired the first line of items in my Etsy shop! This year I had the idea to create little paper houses adorned with white glitter roofs and icicles, in which I could put battery-operated LED votive candles. It was definitely a more ambitious project, and there are many improvements that I could make in the methods and materials now that I've made a prototype, but the result is still pretty cute! 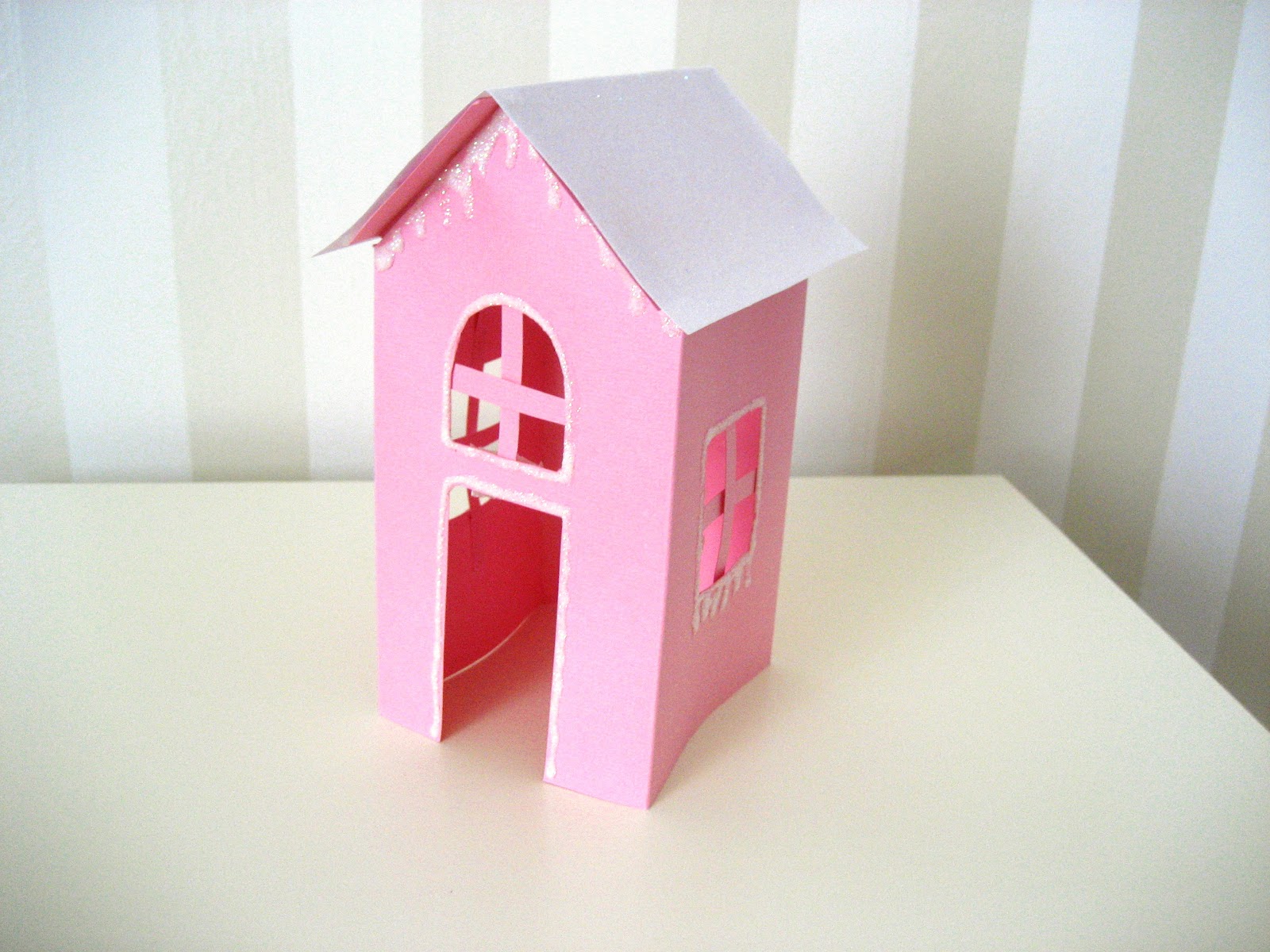 To make the house, I used solid pink cardstock from a pack of pastel scrapbook paper I had on hand--the pastels work best with my room decor, but a traditional Christmas color or brown kraft paper would look nice too. I cut the paper in half to get a strip that was 6" by 12", and then measured to create four even sections with a tiny bit left for overlap on one end. I cut triangle shapes into the tops of two of the sections (the ones that would be on opposite ends once folded) and then trimmed the other sections down to the base of the triangles on either side.

I added details to the house by sketching a door and window shapes on three of the sections, then cut them out. I had planned to use a craft knife for this, but I couldn't get a clean cut for some reason, so I switched to scissors. Because of this, I had to cut skinny strips to create the "paned" effect on the windows and tape them in, which is one of the things I'm not thrilled about in the final product. You can see the extra bits of the paper on the reverse side and it looks a little sloppy, so I'd really like to find a way to use a craft knife for this if I try again.

To add a snowy effect, I outlined the openings with white glitter glue and used the same to make icicles along the roof peak and windowsills. This is another step that went a little awry, since the glitter glue warped the paper somewhat. I'm not exactly sure how I would fix this, except perhaps to use white glitter paper to create the trim.

Finally, I folded the sections, taped them together at the corner, and added a roof made of white glitter paper. The roof was a bit tricky to attach, but eventually I folded strips of paper over the roof peaks to create a little shelf on which I could tape the roof.

As I said, there are plenty of improvements to be made to this project, but I really like the overall look, so perhaps I'll try again to see if I can get the details just right!