I saw Kristina Horner do the Social Media Book Tag on her YouTube channel today, and since I have too few followers to be tagged in these things I thought I'd tag myself for this blog post. The premise of the tag is quirky--share books that fit certain criteria inspired by various social media sites--but it makes for some interesting and surprising questions. Here are my responses:

I had many contenders for this question since I'm a picture book aficionado, but ultimately I went with Time of Wonder by Robert McCloskey because its end-of-summer setting makes it especially appropriate for this time of year. It's a wonderfully lyrical book with beautiful pictures, and I think that anyone of any age who has spent time at the seashore will appreciate how evocative it is.

One summer when my sister and I were around age eleven or twelve, we challenged each other to read a chapter of a book that one of us really loved but the other thought they wouldn't enjoy. My sister's pick for me was Howl's Moving Castle, and it wound up being the first of many books by Diana Wynne Jones that I would read and love.

Tumblr: Share a book you read before it was cool.

I haven't actually read many "cool" books, and when I do read them it's usually after months of hype and buzz that finally make me give into curiosity. So, for this question I'm actually going to share a book that I read long after its initial popularity, but well before a recent cultural resurgence--Alice's Adventures in Wonderland by Lewis Carroll. I read the book and its sequel, Through the Looking Glass and What Alice Found There, when I was around age nine and was sick in bed for a few days, and I found them strange but fascinating. Now Alice-themed things are everywhere, thanks in part to the 2010 Tim Burton movie and the steampunk trend, but I definitely liked Alice before it was cool.

MySpace: Share a book that you don't remember if you liked.

I actually have no answer for this question since I never finish books that I don't like, so all the books that I've finished are books that I liked enough to read through to the end. Instead, I'll provide a public service announcement: don't feel obligated to read books you don't enjoy.

I don't have Instagram, as I believe you need a smartphone to use it. However, I do have a lot of pretty books that I would share on Instagram. My all-time favorite might be the 80th anniversary edition Winnie-the-Pooh by A. A. Milne, but since I already shared that as part of my Book-Tube-A-Thon photos I'll go with the Tasha Tudor-illustrated hardcover edition of Frances Hodgson Burnett's The Secret Garden. 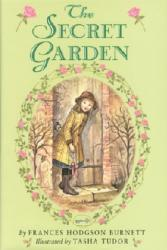 Funnily enough, I've had a lot more ideas for books that should be television shows or miniseries than I've had for books that should be movies. Thinking it over now, I think that Diana Wynne Jones' The Lives of Christopher Chant would make a good movie. There would be lots of visually-interesting details to include when showing the Related Worlds, and if it were popular there could be a whole Chrestomanci series along the lines of the Harry Potter adaptations.

Goodreads: Recommend a book to everyone.

Since I just finished it and it's also a great end-of-summer book, I recommend Swallows and Amazons by Arthur Ransome. It's a classic that I never read as a child, but reading it now I can see why the book and its many sequels have been beloved by multiple generations. Fresh, captivating, and exciting, Swallows and Amazons is like taking a vacation in book form.