My family's garden this year was our most ambitious yet in terms of sheer size--we expanded an existing bed by about three feet and added a new bed spanning the width of the front lawn. Since the new spaces would bring a significant increase in the number of plants to care for, we mostly stuck with easy-to-grow varieties that we've had success with before. Still, we did run into a few issues, as I'll detail later in this post.

To start off with an unqualified success, here are some photos of the portulaca, or moss rose, that we planted in the main shrubbery bed. The last time we had portulaca was in 2011, and while it did well I had a little trouble with the foliage color towards the end of the season. This year, however, brought no problems and stunning multicolor blooms--the biggest in width I've ever seen on portulaca: 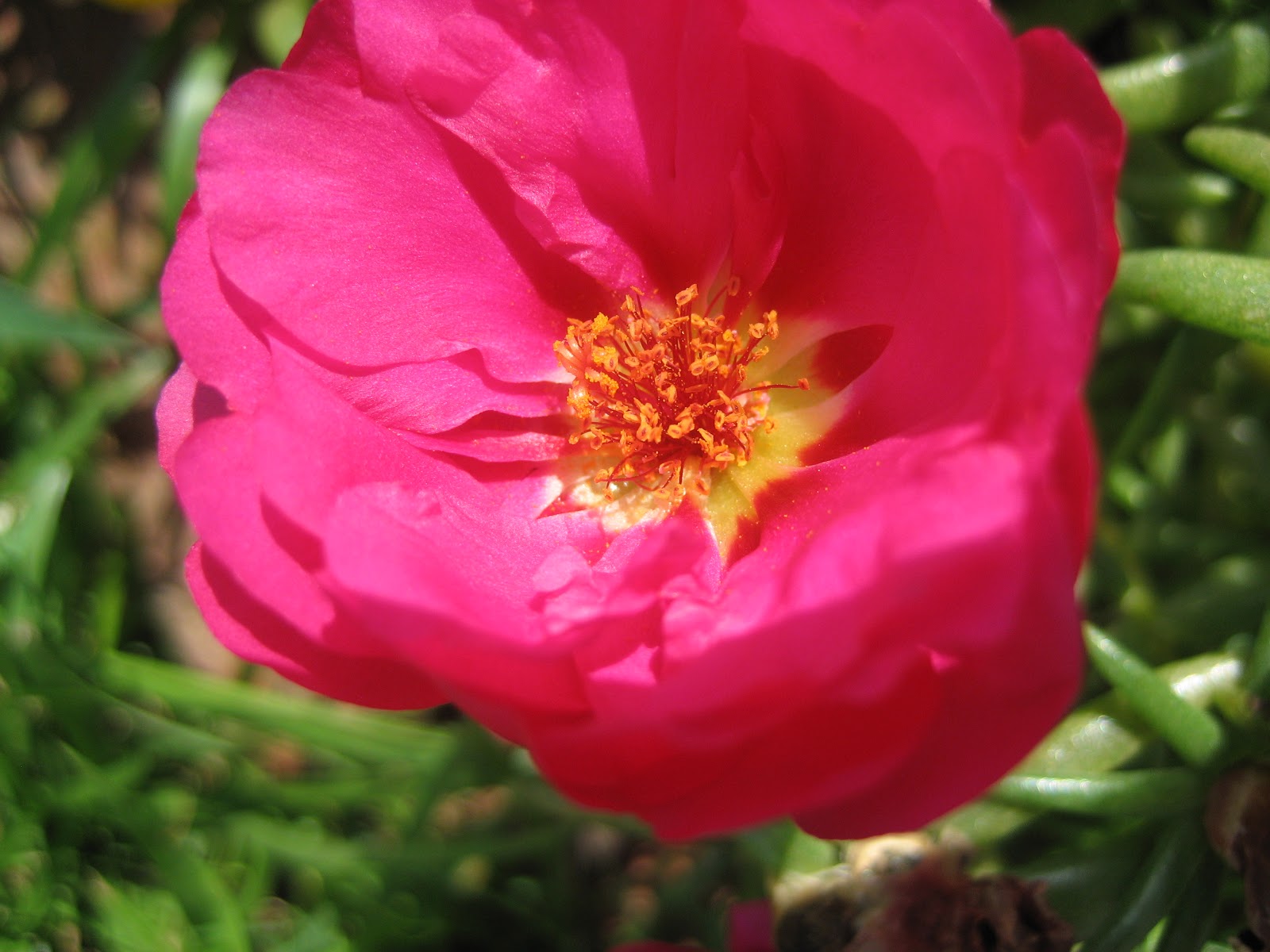 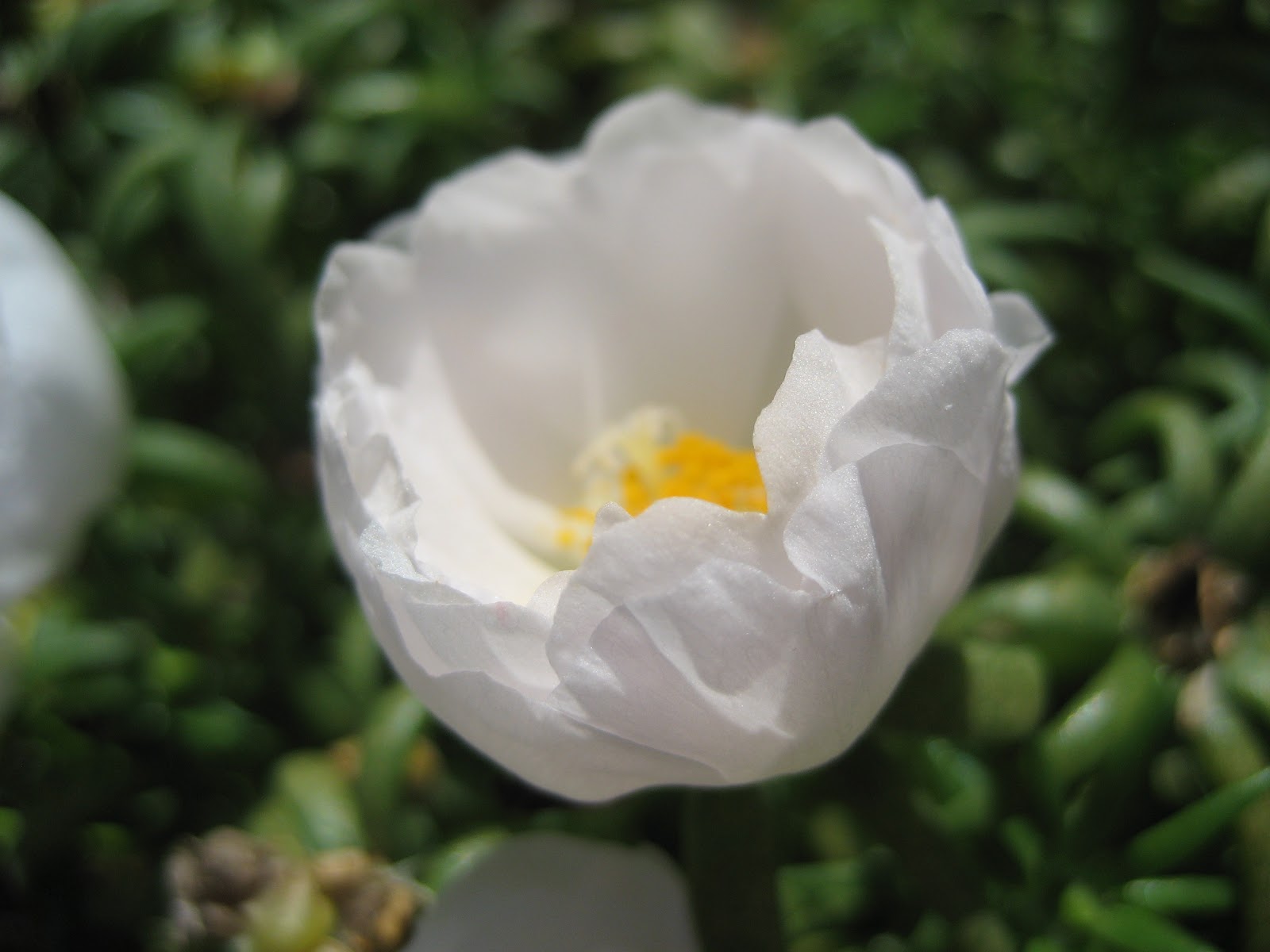 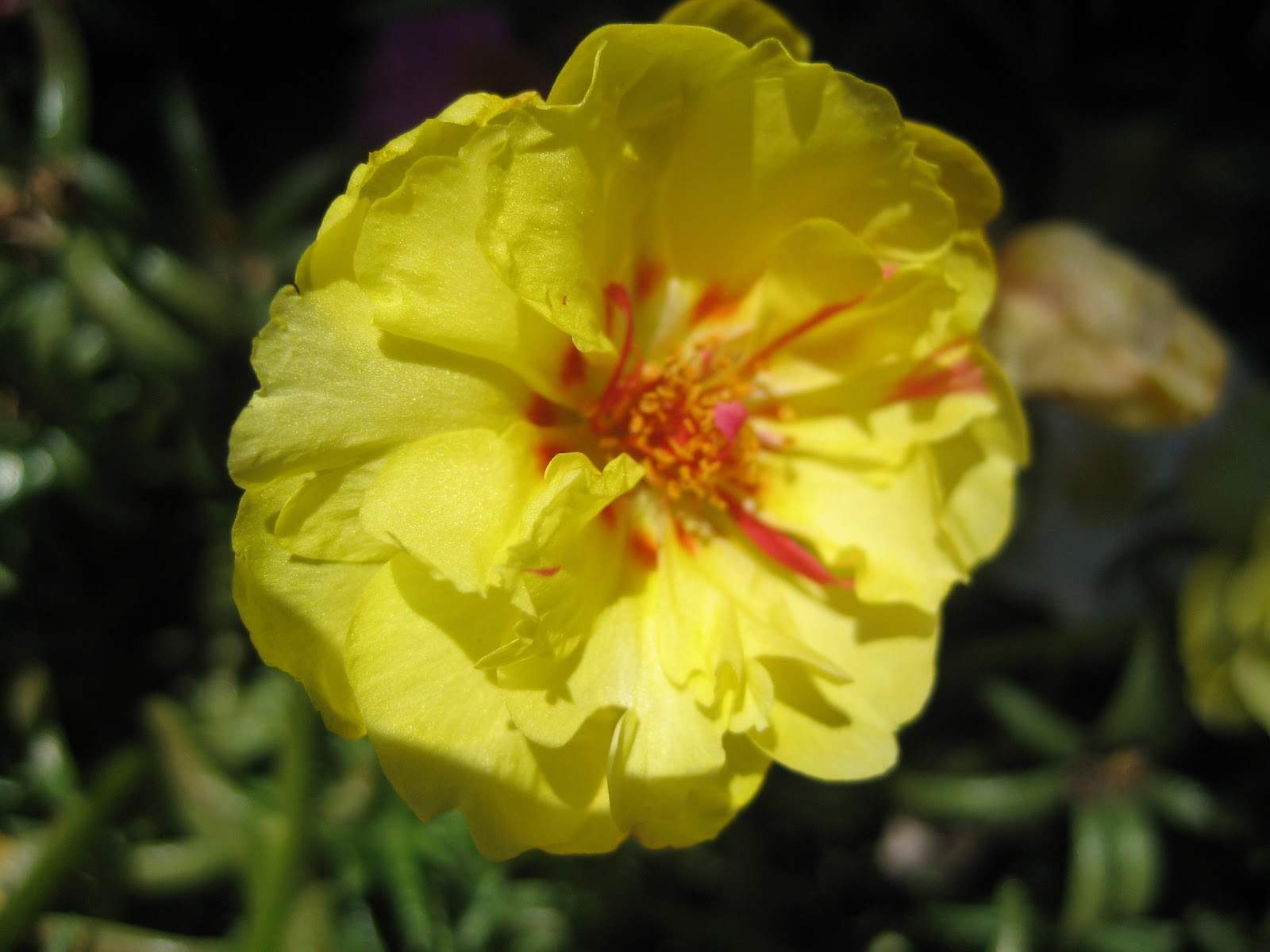 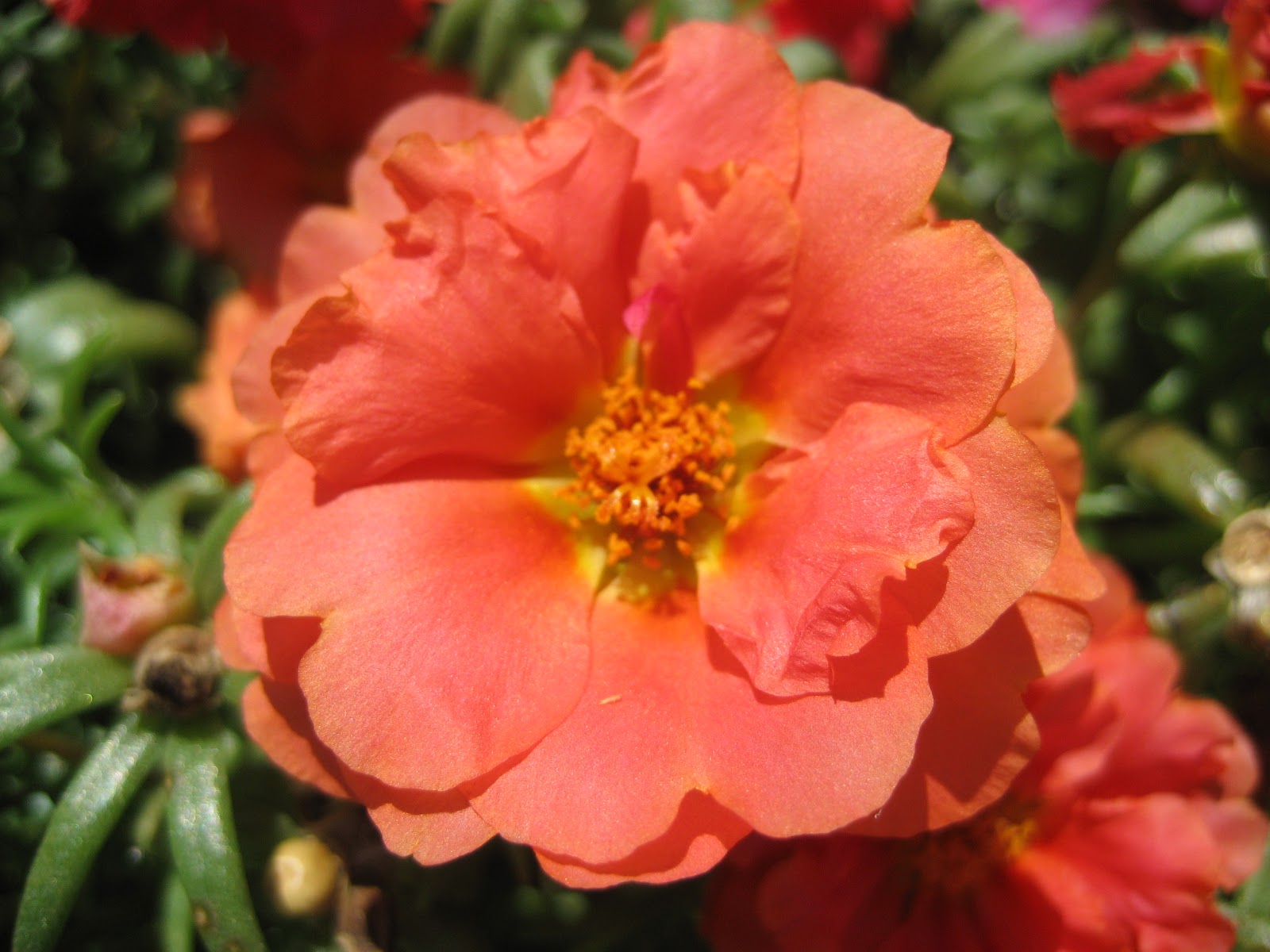 We  expanded the shrubbery bed this year to create more of a waved shape and wound up with an extra quarter-circular space to fill. Since the bed is mostly for shrubbery, we added a "Winter Gem" boxwood with glossy green foliage that will turn bronze in the cold months. The boxwood is small right now, so to fill up the space a little we added white begonias. They grew nice and lush, and the white flowers pop well in the corner: 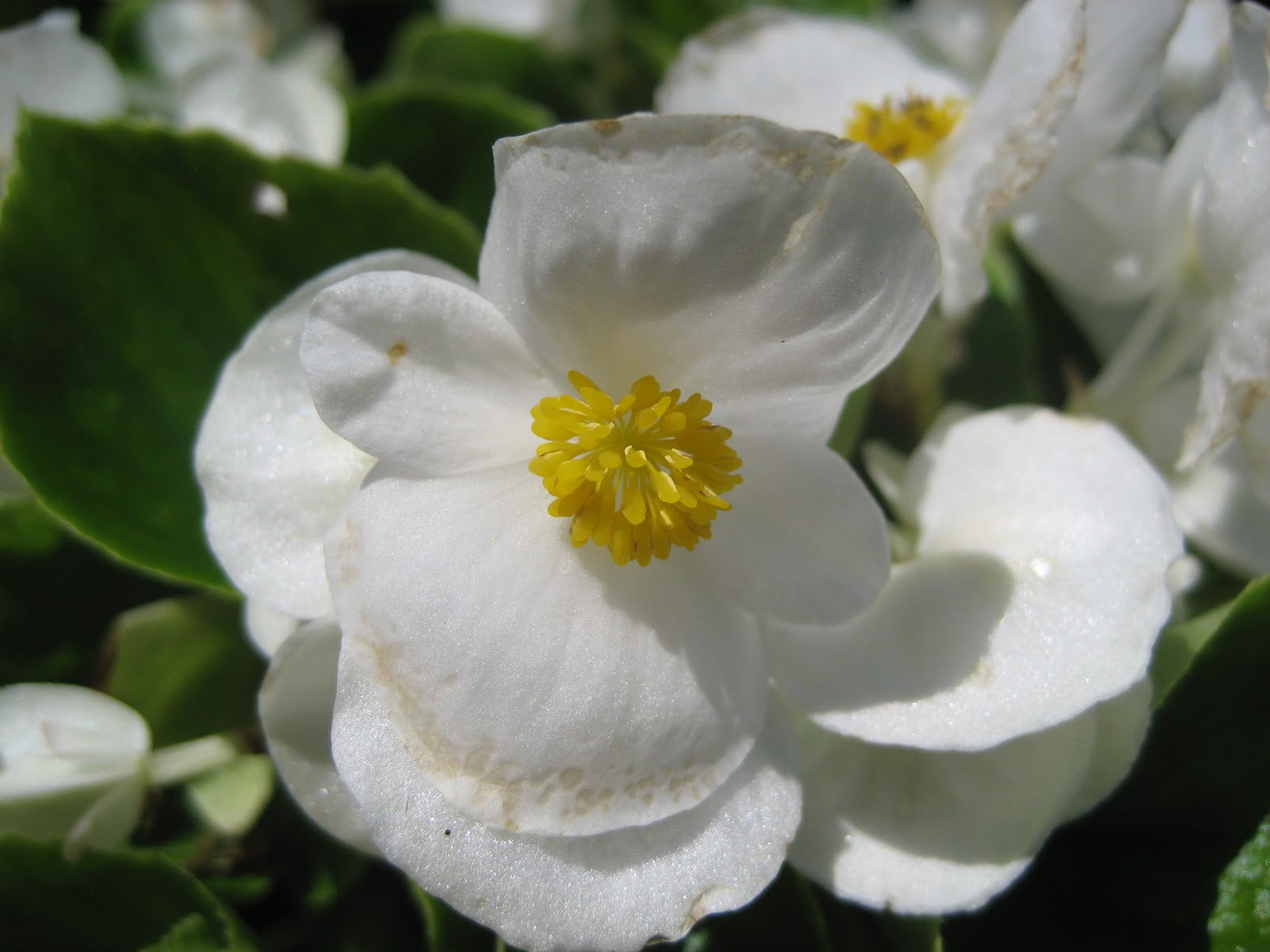 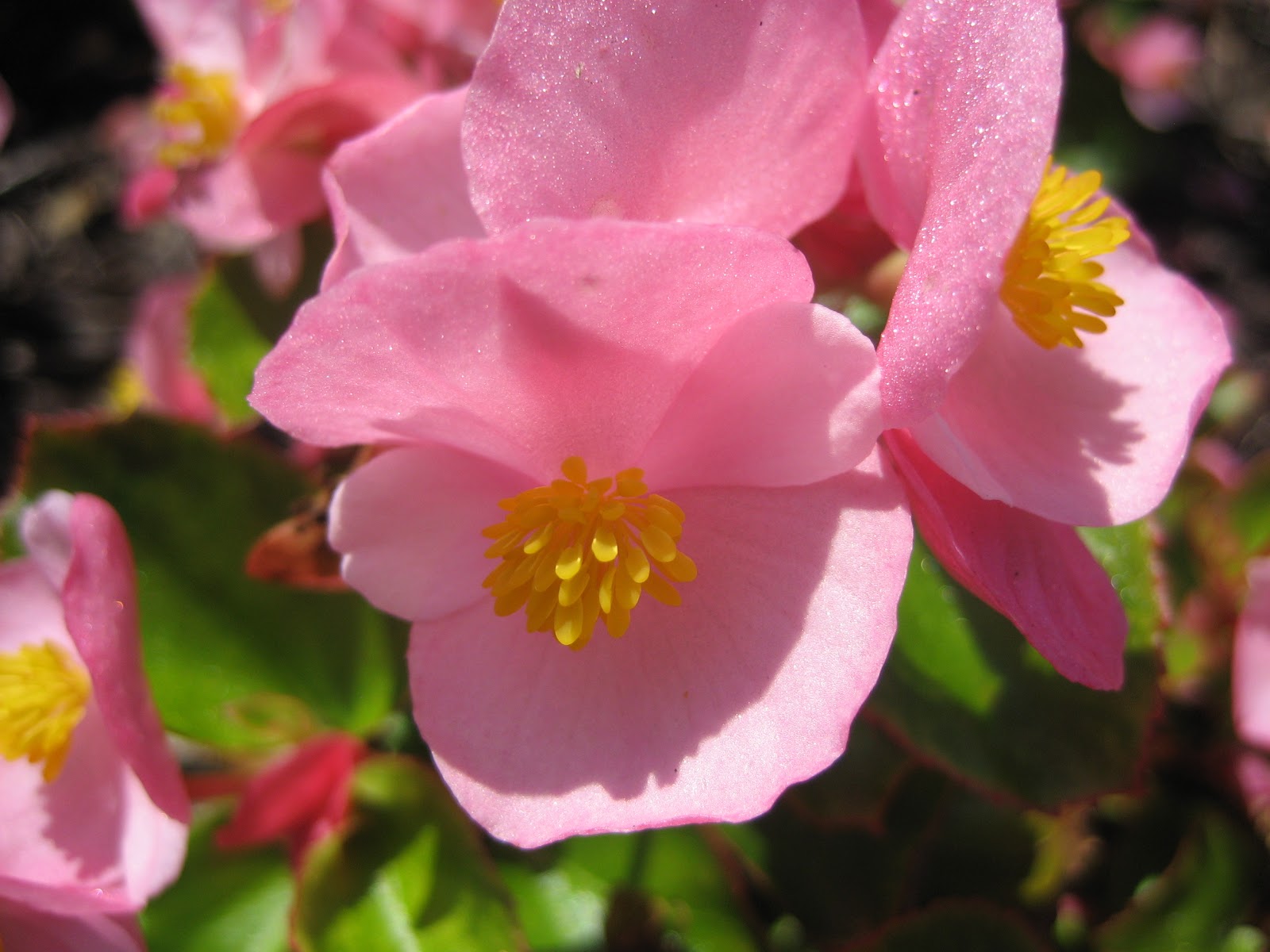 The pink begonias are massed in the middle of the big new bed, and on either side we planted pink hypoestes. We had these last year in the shrubbery bed, and in the future I think we'll stick to keeping them there--in the brighter sun they seemed to have more brown-green than pink on the leaves, so they don't pop well against the brown mulch. Still, they got small purple flowers much earlier than they did last year, which is nice: 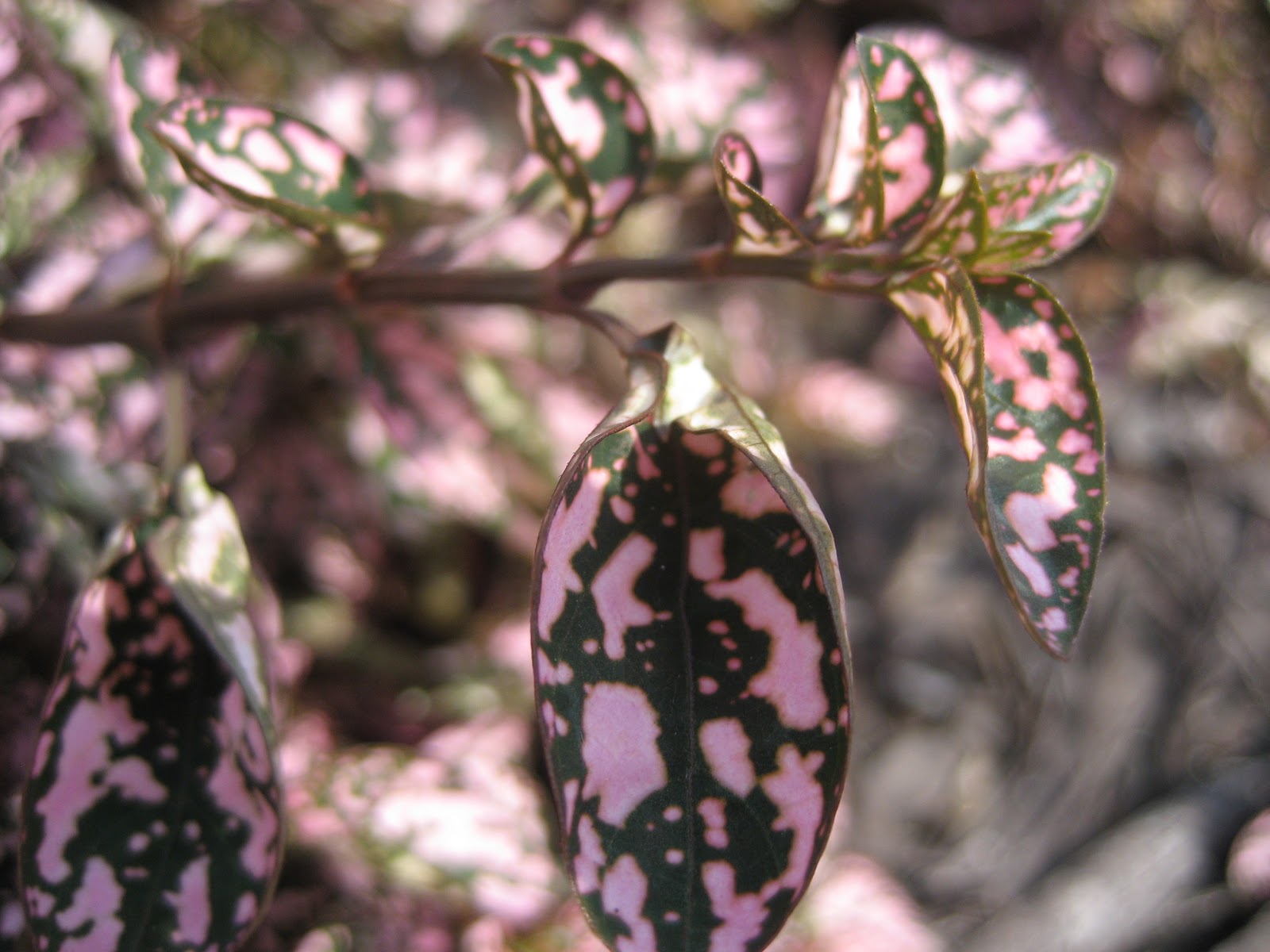 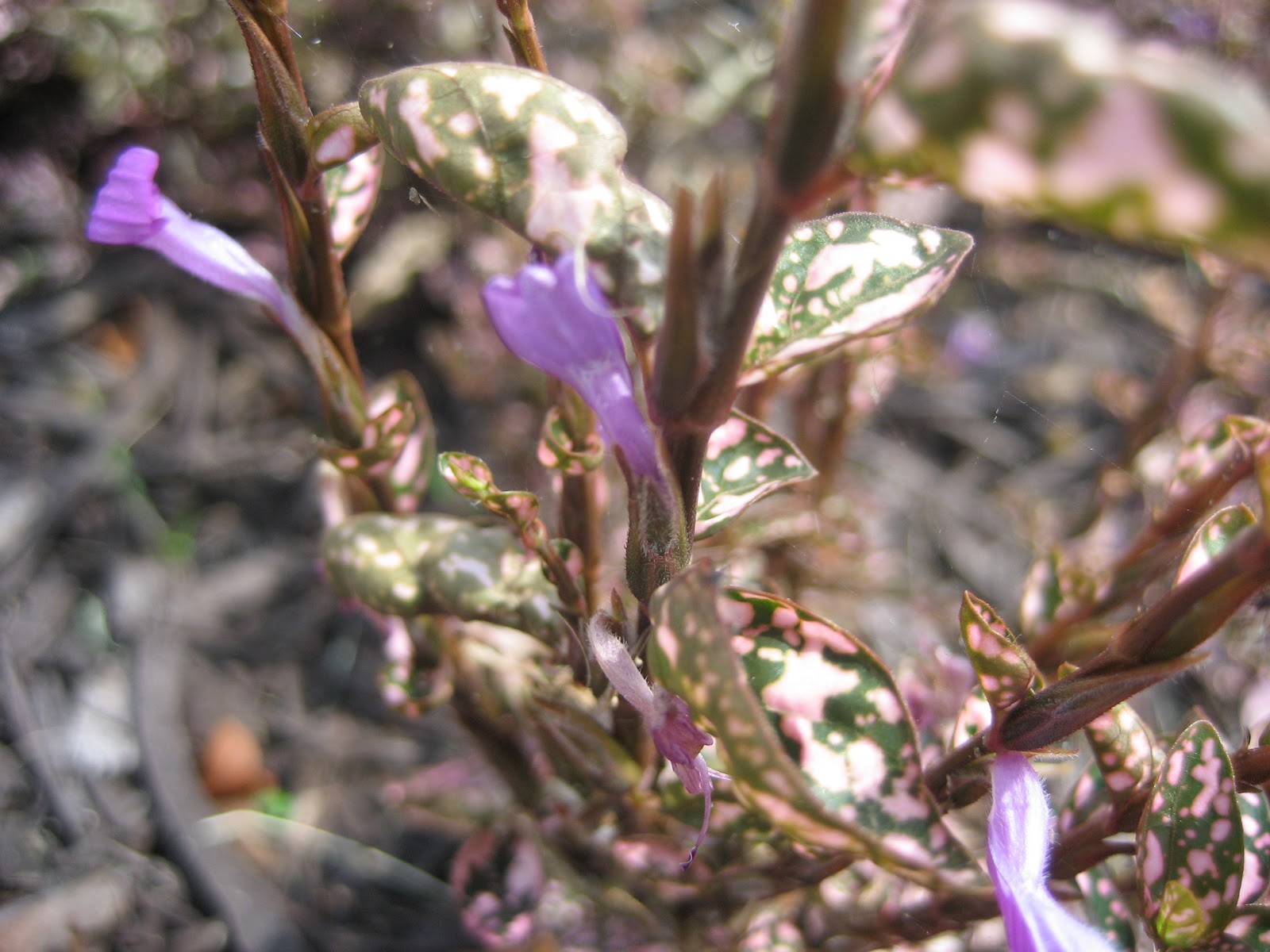 We have three quarter-circle beds anchoring the corners of the front lawn and strip of grass next to our front walkway, and in them we repeated last year's selections of bidens and Mexican heather. The bidens grew even bigger than before, since we planted it at the start of the growing season instead of as a replacement. The heather did just as well as it did last year: 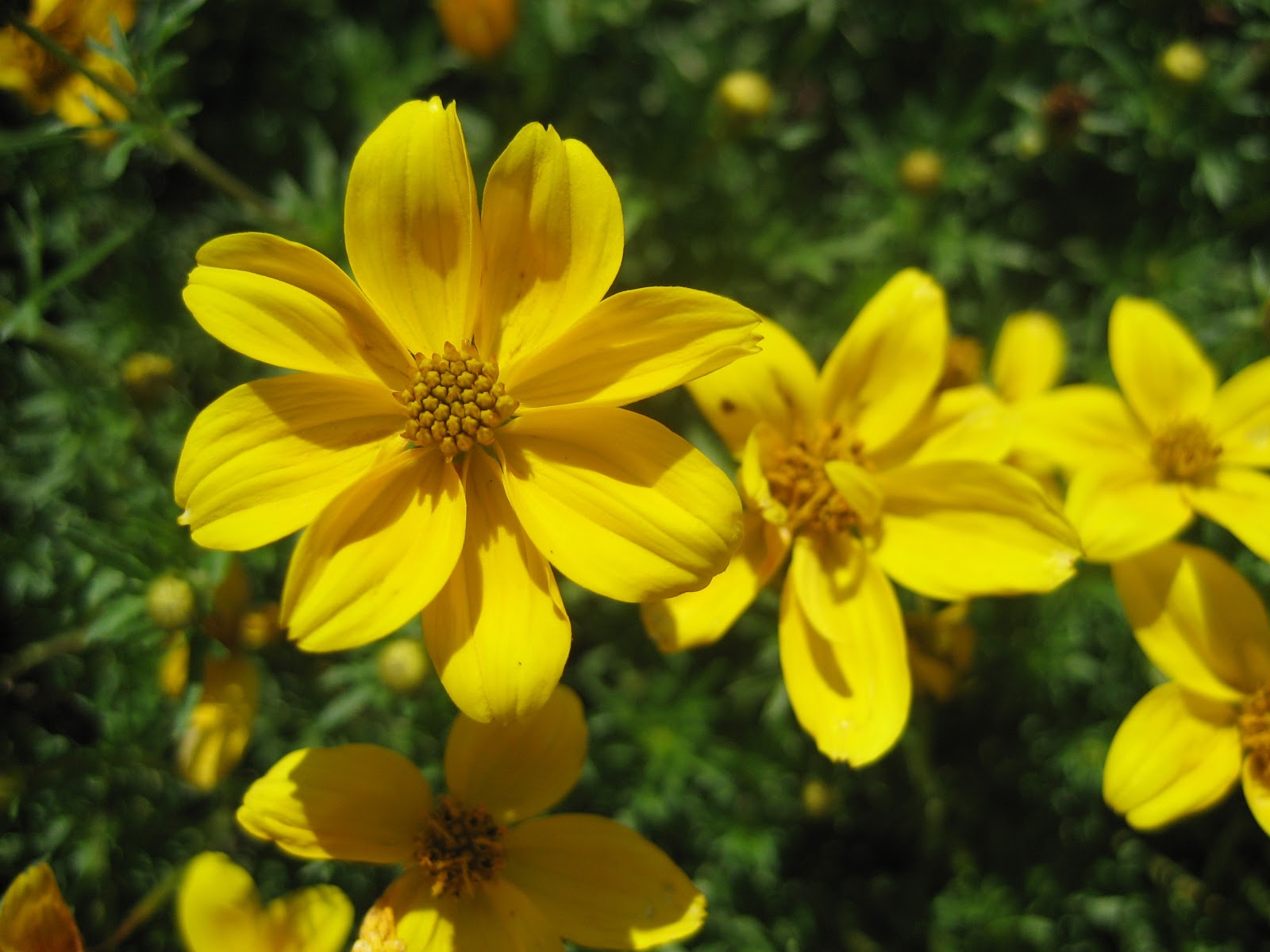 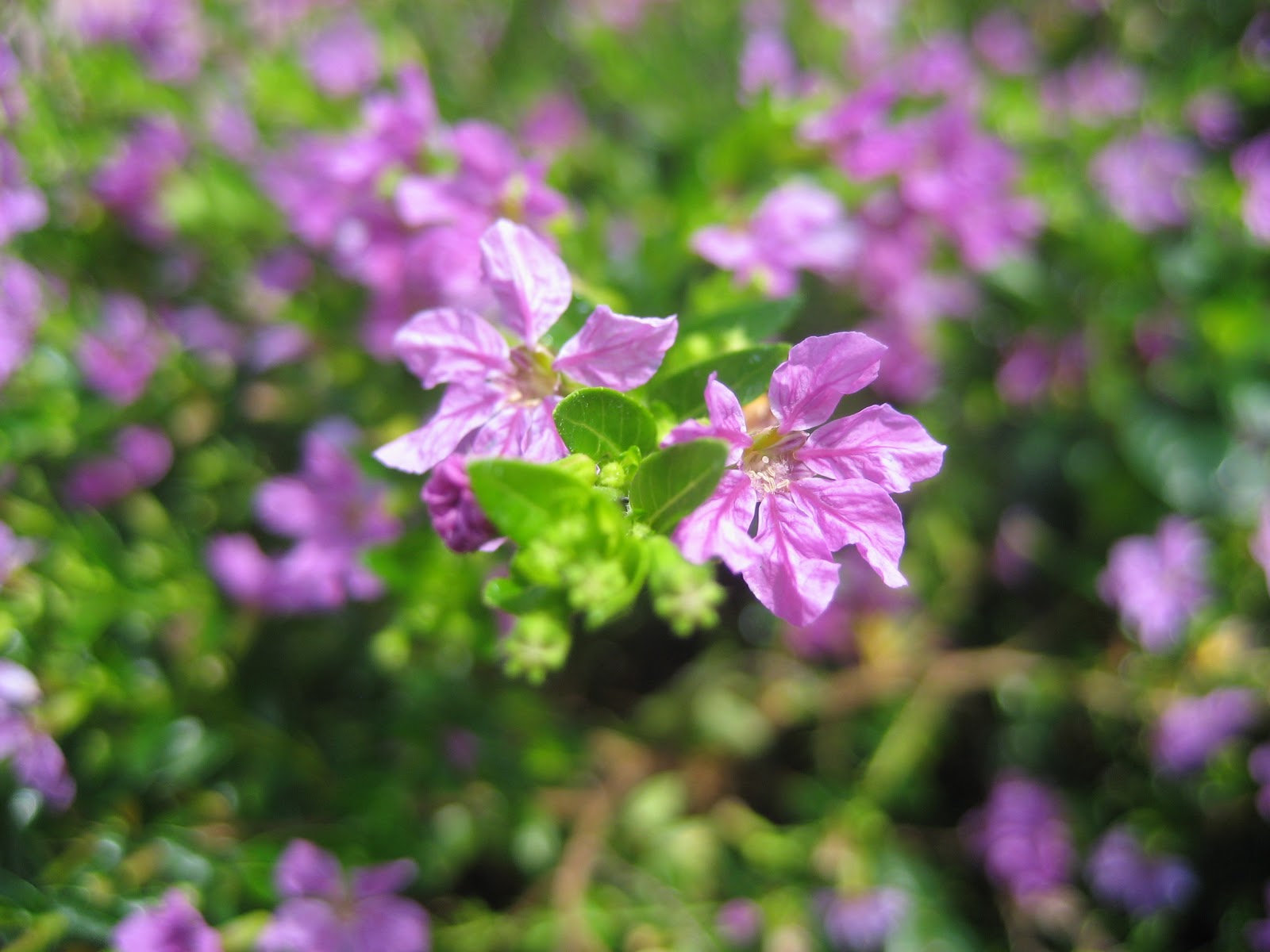 Next to our brick front steps are two smaller quarter-circle beds that used to have perennial ivy growing in them. One side never really took and the other deteriorated in the harsh winter this year, so we pulled it all out and planted impatiens. They were back at the garden center this year after being unavailable due to downy mildew the year before, but we were still taking a risk that they'd eventually contract the disease. They grew big and beautiful in the first half of the summer but eventually I noticed the foliage looked a bit  pale and papery. Sure enough, mildew was present on the undersides of the leaves, and within a couple of weeks the plants died. They were gorgeous while they lasted, but unfortunately I didn't get any photos of them at their peak.

The pale pink double impatiens we planted in pots also succumbed to downy mildew, but they died off right away. We replaced them with double trailing mini petunias, which can sometimes be tricky to grow but which did beautifully even with a later planting date: 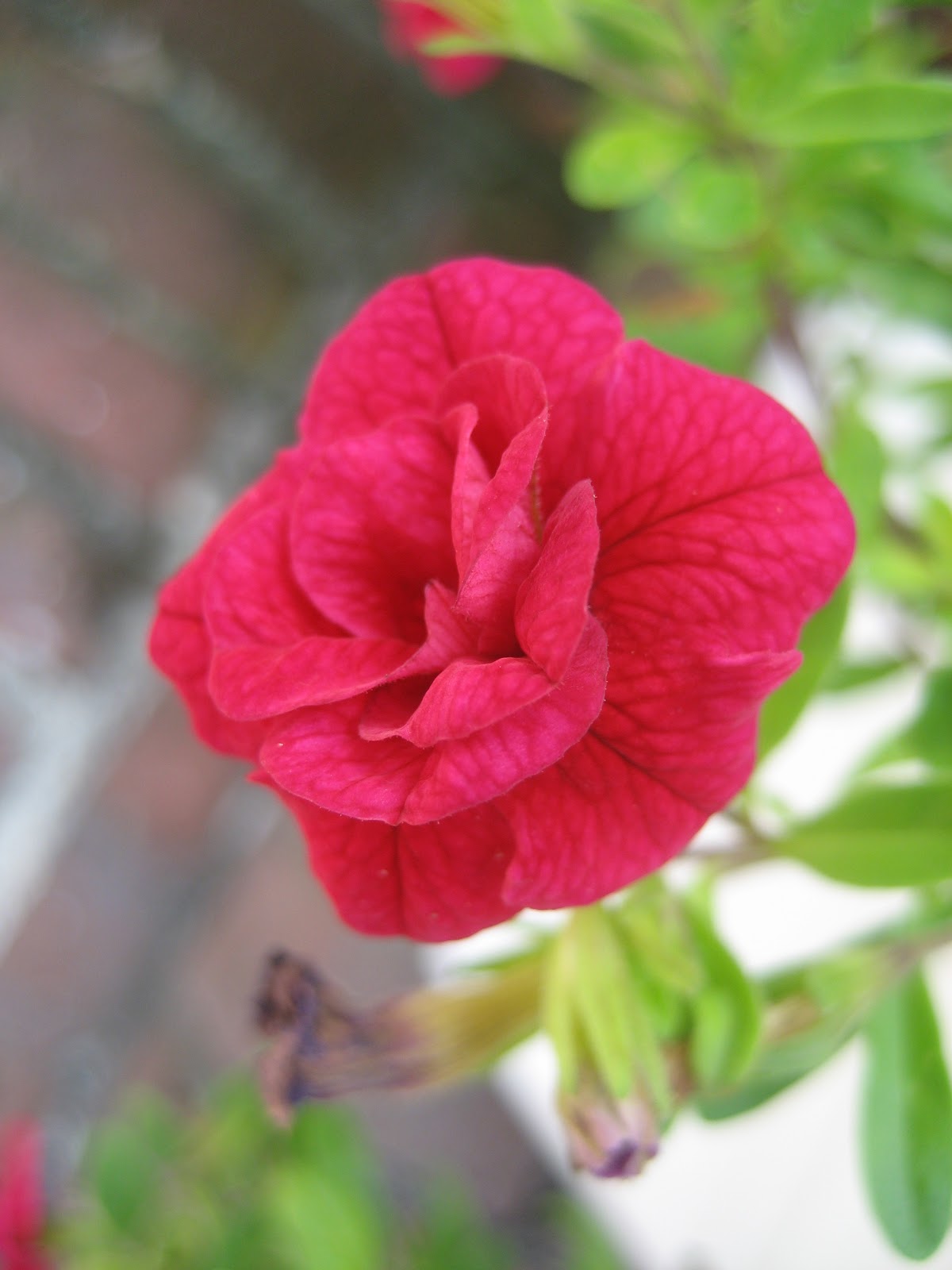 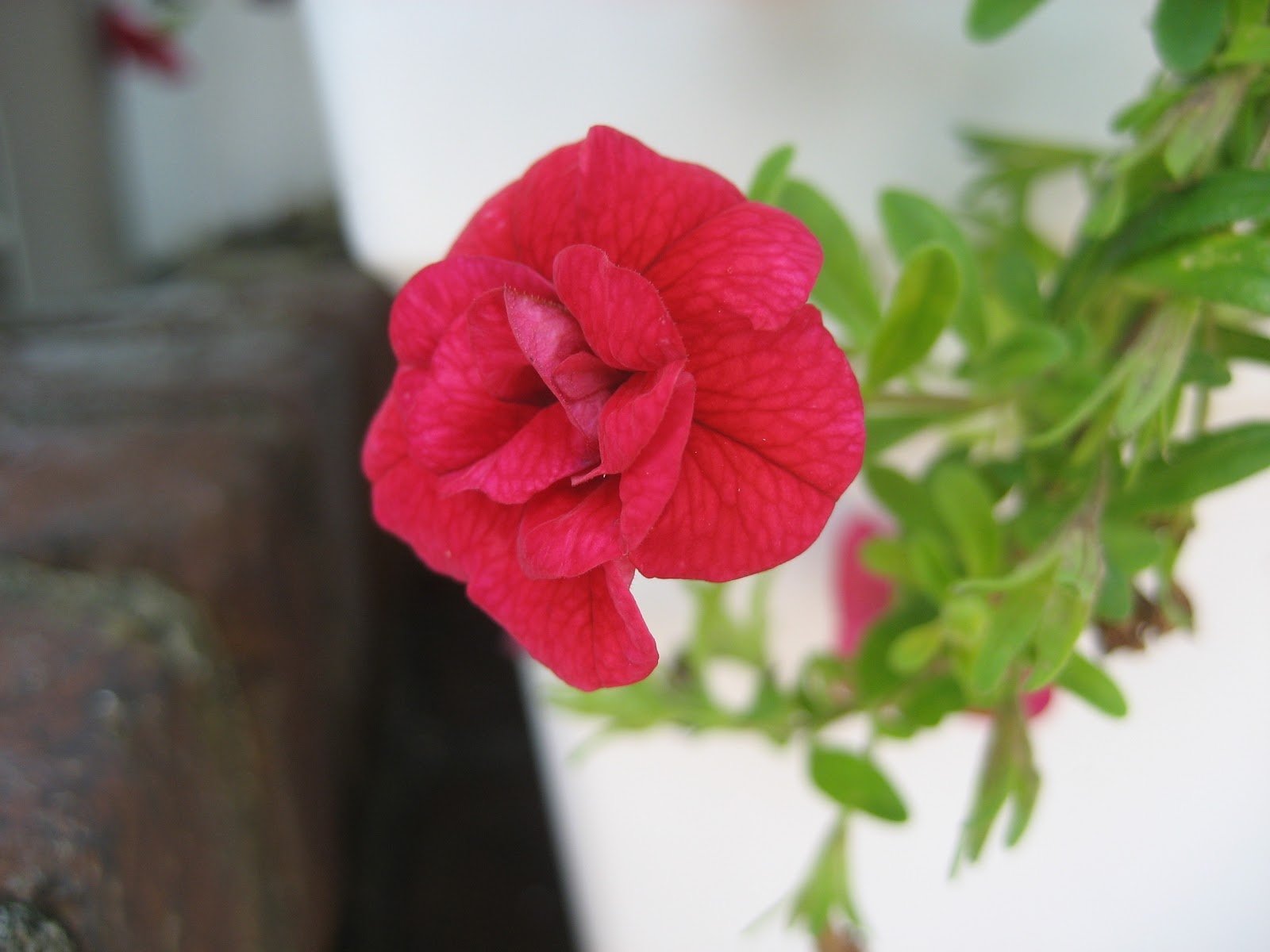 Finally, we went with mini snapdragons for the second year in a row for our second set of pots. They require a bit more care than our other flowers since they need to be deadheaded, and this year I found there was a more noticeable lag between bloom cycles. However, when the plants are in full bloom they're spectacular: 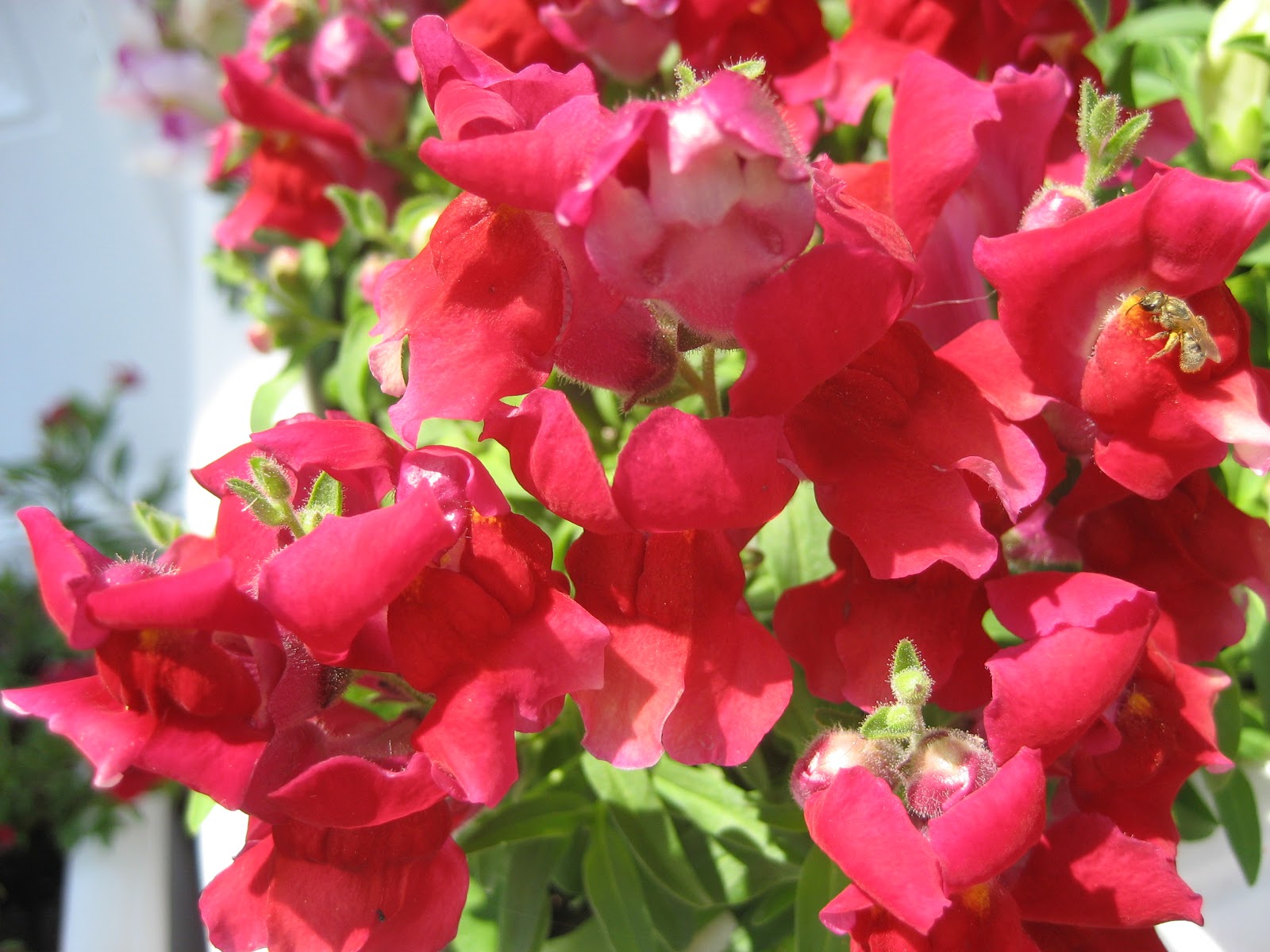 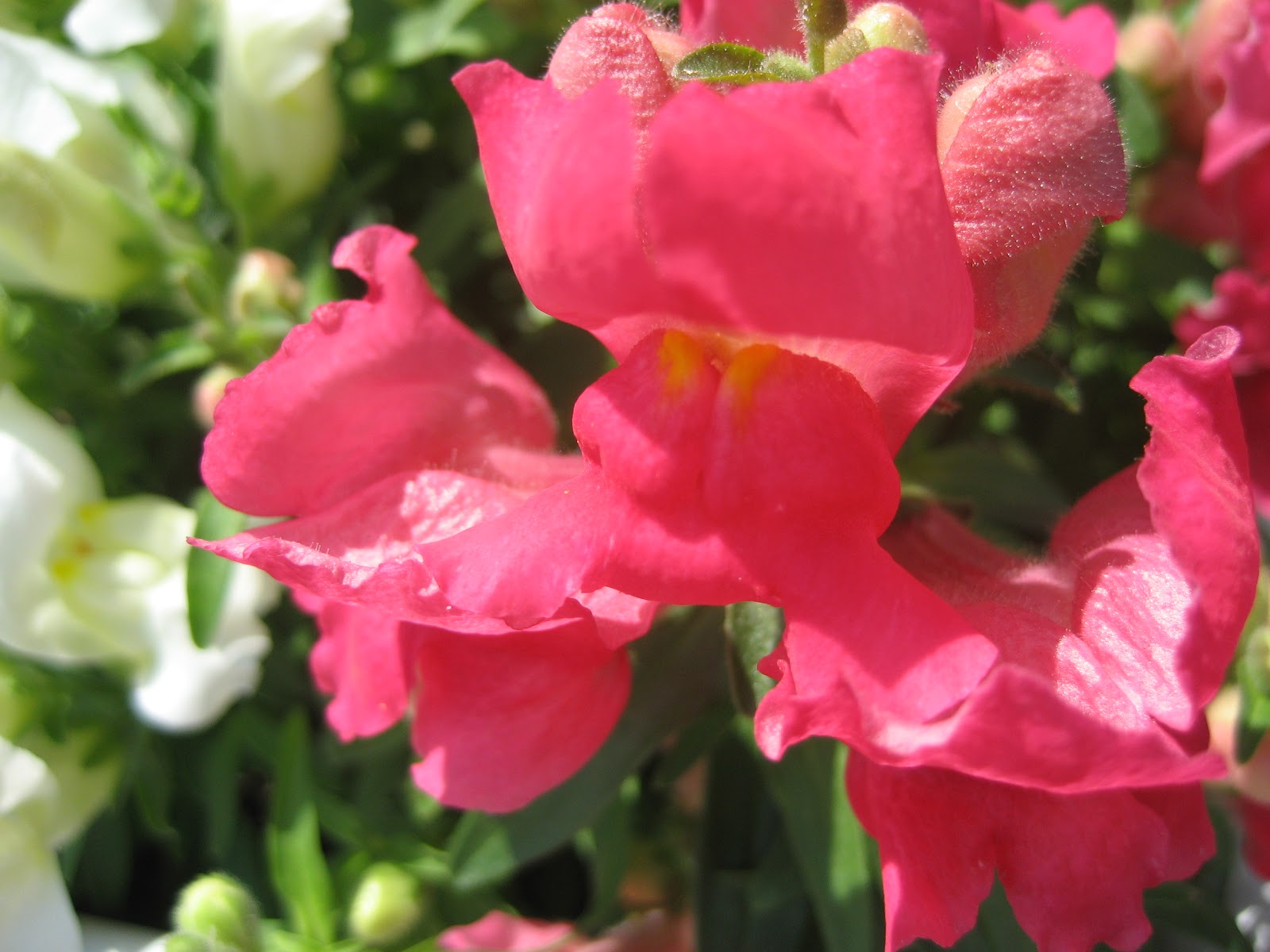 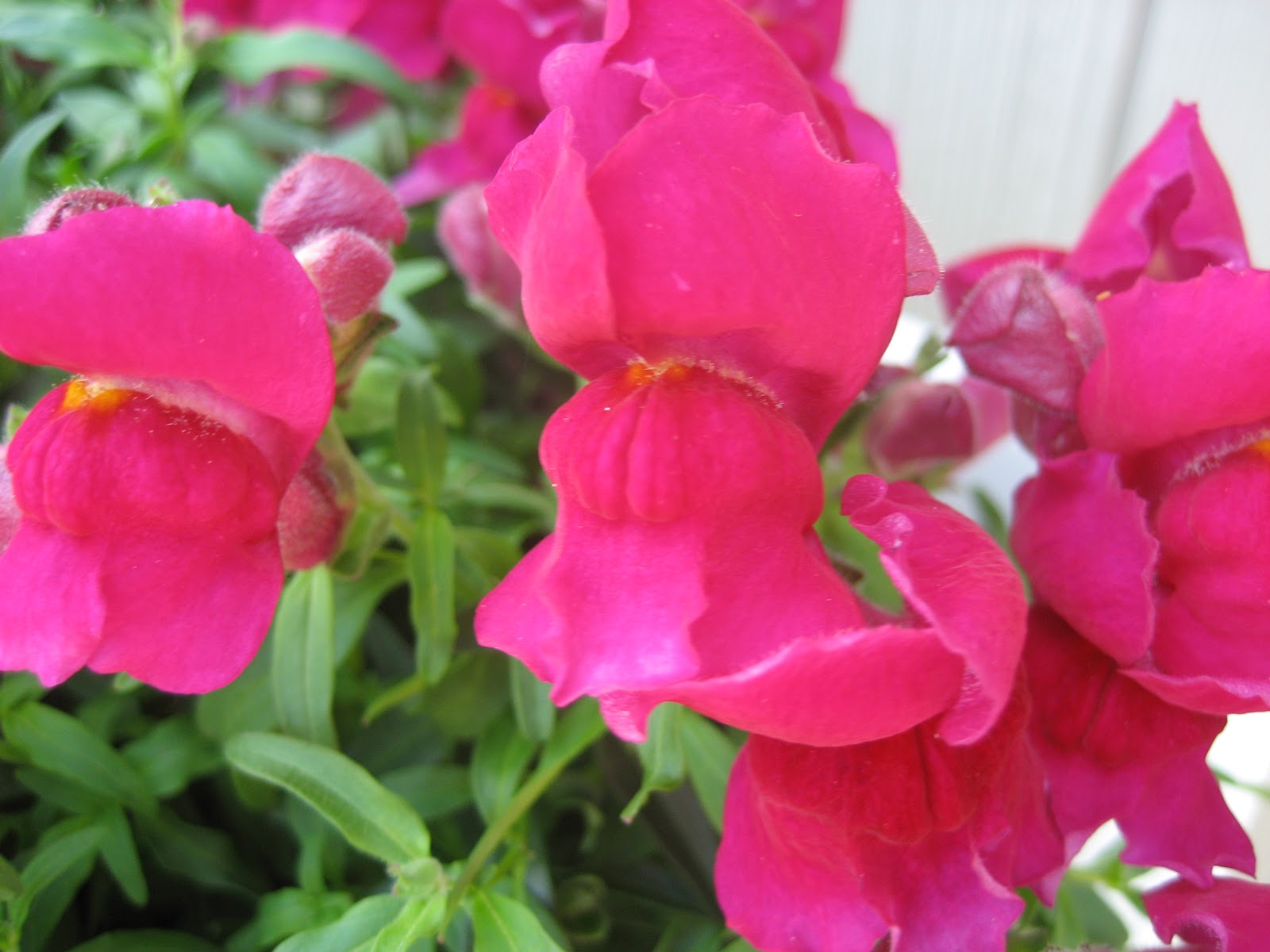 The weather has been wonderful where I live and it's really been helping to keep the plants looking fresh and vigorous. As usual, I'll keep most of the annuals as late into the autumn as possible, replacing only the most summery-looking ones like the portulaca with fall pansies sometime in September. Until then, I'll be enjoying my summer annuals and this beautiful summer weather!