Last fall I began knitting a red lace scarf inspired by the one worn by the character of Amy Pond in various episodes of Doctor Who, Series 5. The rush of the holidays and school assignments for the Fall 2012 and Spring 2013 semesters prevented me from making as much progress as I would have liked, but over the summer I committed myself to the project anew and finally finished it a few weeks ago: 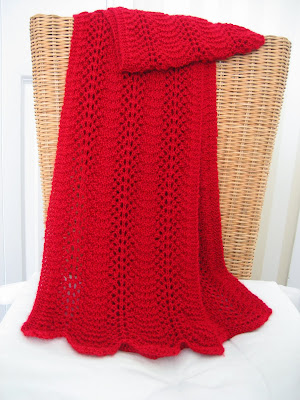 As I mentioned in my Doctor Who Knitting post, where I shared an early progress photo of this project, the scarf isn't an exact replica of the one featured on the show. That scarf uses a fairly complicated lace pattern, one that proved a bit beyond my skill level since I'm fairly new to knitting lace. I chose a beginner's lace pattern instead--the classic feather and fan (or, according to stitch pattern name purists, old shale). Unlike the pattern used for Amy's scarf on the show, feather and fan does not require a lace stitch chart to follow and has a simple 4-row pattern repeat. This made it easy to work on while watching television, which is when I typically pick up my knitting projects.

I'm really pleased with how the scarf turned out, and I'm excited to wear it out and about now that the weather is chilly enough. It's about six feet long--slightly longer than a typical woman's scarf--which makes it nice and cozy. I plan on wearing it with my navy blue trench coat--another nod to Amy Pond's ensemble, since she wore her red lace scarf with a dark blue-green coat. 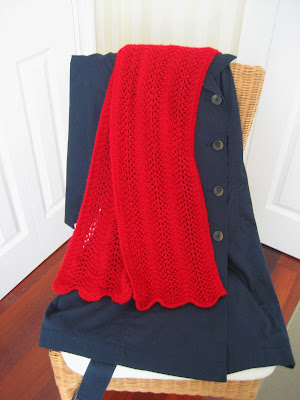 I highly recommend using the feather and fan pattern if you'd like to make a scarf inspired by Amy's but aren't up to a complicated lace pattern stitch yet. Even if you're just looking for a pretty, vintage-looking scarf, I'd recommend giving this stitch a try--the eyelets, ripples, and scalloped borders are so delicate and beautiful, but the pattern is so simple! Stitch pattern instructions are pretty easy to find online--fool around with different yarn weights, needles sizes, borders and repeats to get the look you want. For reference, I used Caron Simply Soft Light yarn in "Real Red" with size six needles. My scarf has a three-stitch border of garter stitch on each side, three eyelet sections, and is symmetrical.