Last spring, I wrote a post about my ineptitude with social media sites, in particular Pinterest. I made a Pinterest account for Sparrow Tree Square after I noticed that some of my traffic was coming from things people had pinned on the site, and while I made an effort to create useful boards at first I soon let the account gather dust. I also made a personal Pinterest account linked to this blog in January, and pinned about four things in the first month before letting that account fall to the wayside as well.

Over this summer, I put some more effort into the Sparrow Tree Square Pinterest account and began to feel that I was actually getting the hang of it. Encouraged, I revisited my personal Pinterest account this autumn and made some new boards to gather products and ideas related to the kinds of things I write about here--decorating, knitting, arts and crafts, and beauty. It was fun and quickly became a little addictive pinning things I had bookmarked and searching out new things to pin.

I felt that I was now quite Pinterest-savvy, but according to this e-mail they sent me Pinterest apparently disagrees: 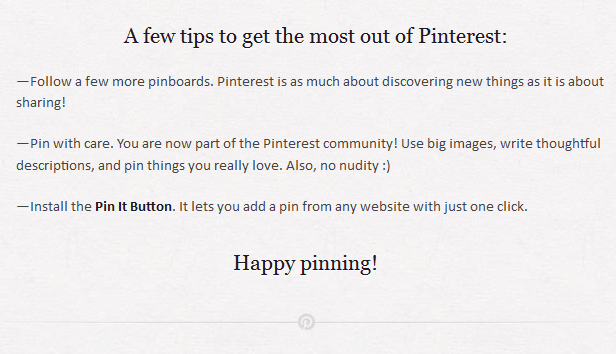 The first tip is where I've failed according to Pinterest. I know that lots of people use Pinterest to find new ideas by following others' boards, and that many people use Pinterest to share things with followers. I do the latter at my Sparrow Tree Square account, but the former on neither. On my personal account I've been using Pinterest like a virtual version of a design inspiration board combined with a visual version of internet bookmarks--I don't mind if other people see and get inspiration from my pins, but I'm mostly creating these boards for my own enjoyment and reference rather than for sharing. I also prefer to use Pinterest to save things that I've found elsewhere rather than a destination for discovery itself, since I find their homepage and search results too disorganized to be useful.

Despite Pinterest's suggestion, I will happily continue using the site in my own way, curating rather than sharing or discovering. I suppose I'm just more "pintroverted" than the average user--and I'm just fine remaining that way, thank you very much.