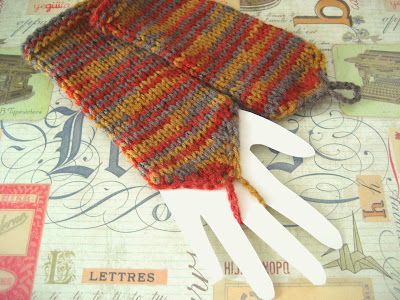 When I was a beginner knitter, I would often come across patterns that I really liked but were beyond my skill level. Usually I tucked these patterns away until I was ready for them, but sometimes I would try to get a similar looking item using simpler techniques.

These mitts were the result of one such experiment. I saw a pattern for mitts in Knitscene's Fall 2010 edition that had a pointed top and finger loops, but were made using somewhat tricky construction methods. With a little trial and error, I came up with a pattern that had a similar style, but used only basic knit, purl, decrease, and crochet stitches. A beginner knitter who has mastered these few stitches should have no problem making the basic version of this pattern, and intermediate knitters can easily recreate the cable and lace adaptations.

Slip the remaining stitch from the needle onto a 5.0 mm crochet hook. Using the hook, make a chain of 10-12 stiches, or however many stitches are needed to wrap around your middle finger. Attach the final chain of the stich to the point of the mitt with a slip stitch.

Turn the work inside-out and, using a yarn needle, stitch up the back seam and weave the end in.

Cast on 26 stitches instead of 25. Make as in the basic version, but work a 2x2 cable with a border of reverse stockinette stitches up the middle of the piece. When decreasing, work until there are 2 stitches left and bind off together. Complete as in basic version. I used Lion Brand Jiffy yarn in Rose Spray for this variation, which is a bulky-weight yarn while the basic variation uses medium-weight yarn. Bulky-weight yarn gives a thicker, plusher texture, but the pattern is designed to work with a medium-weight yarn so go ahead and use whichever weight you like! 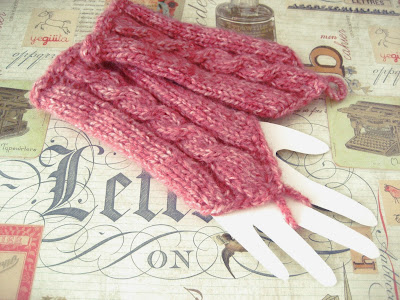 Cast on and knit edging as in basic variation, but work the following lace pattern beginning in row six:

Work the lace pattern until the piece measures six inches. Begin decreasing as in basic pattern, but continue the lace pattern in the middle of the piece--the number of knit stitches at the beginning and end of each row will decrease by 1 on each end each row. When you have repeated the lace pattern rows 1-6 for a total of 6 times in the piece, switch to plain stockinette for the remaining decrease rows. Bind off and complete as in basic pattern. I can't quite recall which yarn I used for the mitts pictured, but I believe it might have been Bernat Satin in Snow. 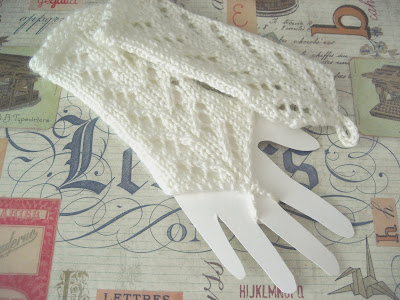