Blogger's Note: I've written over 50 book reviews for my literature education resource site, Sparrow Tree Square, but this is the first I've ever done for That Sort of Blog. Oftentimes I'll include reviews of adult books in Sparrow Tree Square's young adult book review section when I think teen readers will enjoy them, but sometimes I come across a book that is really best appreciated by readers in their 20's and up. I'll be sharing reviews of these books, in a more personal style than I use for Sparrow Tree Square reviews, on this blog as I come across them. 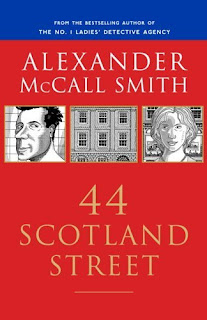 44 Scotland Street follows a diverse group of characters living at the titular address in Edinburgh. Pat, a twenty year-old woman living on her own for the first time, is on her second gap year before beginning university. Bruce, Pat's new narcissistic flatmate, works as a surveyor but yearns to join the wine trade-- despite not knowing anything about wine. Domenica, a retired anthropologist,  seems to know all the secrets of Scotland Street. The Pollock family includes Bertie, a five year-old prodigy, and his parents, who haven't seen their car in weeks due to forgetting where they parked it.

More colorful characters populate the lives of those residing at 44 Scotland Street. Matthew, Pat's new employer at a local art gallery, has drifted listlessly from career to career with no real drive and seemingly no real talents. Angus Lordie, a middle-aged painter and old friend of Domenica's, has a dog that winks at everyone. The Todds, Bruce's snobby employers, throw a political fundraiser ball even though only six people have responded to their invitation and force their rebellious daughter Lizzie to attend.

For readers used to thrills and chills on every page of a book, 44 Scotland Street may seem a little lacking in action. The novel, originally published in serial form in The Scotsman, simply follows the characters as they lead their everyday lives. But in addition to fascinating character explorations there are many small episodes of intrigue in 44 Scotland Street, including a mystery surrounding a painting and an adventure through an abandoned tunnel beneath the surface of Scotland Street. As a fan of light, non-genre fiction by authors such as Miss Read and Beverley Nichols, I was pleased to come across a modern novel that took this quieter approach to storytelling.

I also found it interesting that 44 Scotland Street featured many twenty-something characters who are somewhere between the adolescent and truly adult stages of their lives. Pat, Bruce, Matthew, and Lizzie face problems familiar to many young people starting life as adults: difficulties living independently, forging a satisfying career, and finding the right romantic partner plague all four characters. As a twenty-something myself, it was refreshing to find a book that dealt so extensively with characters of my own age with realistic problems, as young adult books tend to focus on characters in their teens and adult books often feature characters in their early thirties and up.

44 Scotland Street is the first of a series following these characters, and I'm definitely interested in reading more about Pat, Domenica, Bertie, and the rest. There's something for everyone in 44 Scotland Street, and I highly recommend it to readers who enjoy light reads with a relaxing pace.