Note: I originally published this post on The Sparrow Tree Square Blog on June 3, 2011 as "A Bit of Jeeves and Wooster". It is one of a handful of Sparrow Tree Square posts that I'm moving over here, where they better fit, and will be part of a new series on That Sort of Blog called "Great Adaptations."

Film and television adaptations of books can be tricky things. No adaptation can (or should) slavishly recreate every detail of a book, but some adaptations deviate so far from the source material as to tell almost entirely different stories. The best adaptations, in my opinion, are able to add a new spin on the original material while maintaining the spirit of the source.

The television series Jeeves and Wooster is one of the few adaptations I've seen that strikes this balance perfectly. In some two dozen episodes produced over four seasons, the series adapts the novels and short stories of P. G. Wodehouse that feature Bertie Wooster and his man Jeeves. The affable Bertie Wooster is played by Hugh Laurie, who is perhaps best known in the United States for playing the misanthropic titular character on the series House M.D. Stephen Fry, recently seen on American television as a recurring character on Bones, plays Bertie's valet Jeeves. 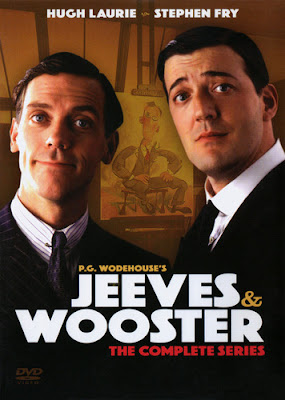 Adapting Wodehouse's work is perhaps more challenging than adapting other stories, since the language is key to what makes his stories so funny. I think Hugh Laurie explains it best in his essay, "Wodehouse Saved My Life":


But the thing that really worried us, that had us saying "crikey" for weeks on end, was this business of The Words. Let me give you an example. Bertie is leaving in a huff: " 'Tinkerty tonk,' I said, and I meant it to sting." I ask you: how is one to do justice of even the roughest sort to a line like that? How can any human actor, with his clumsily attached ears, and his irritating voice, and his completely misguided hair, hope to deliver a line as pure as that? It cannot be done. You begin with a diamond on the page, and you end up with a blob of Pritt, The Non-Sticky Sticky Stuff, on the screen.

Despite his fears, I think that Laurie did more than the roughest sort of justice to those lines. Both he and Fry so embody the characters of Bertie and Jeeves that when I read Wodehouse's stories now, I hear their voices speaking the dialogue. You can get an idea of the rapport Fry and Laurie have in this clip from "The Hunger Strike," starting at around the 1:00 mark:


One of my favorite things that the producers of this series did was to give Bertie a talent for the piano. Laurie had already established himself as an able musician on his comedy sketch show with Fry titled A Bit of Fry and Laurie, and apparently the producers of Jeeves and Wooster decided to utilize this talent on the show by featuring scenes in which Bertie covers the songs that are the latest craze at the Drones Club. In this clip, you can see Bertie and Jeeves puzzle over "Puttin' on the Ritz":


The music created especially for the series was spot-on as well. An MP3 album featuring the original music as well as Laurie's performances of period songs is available, and I can attest to its excellence. You can also find most tracks on YouTube, including the brilliant theme music:


I highly recommend the Jeeves and Wooster series for any Wodehouse enthusiast. Although the plots of the original stories were sometimes altered or combined, the spirit of the books is present in every line. My only complaint is that most of the supporting characters were played by different actors over the course of the series, which can make it a little confusing to follow who is supposed to be whom at times. Anyone who's read enough Wodehouse stories will recognize the characters by their names if not their faces, however, so on the whole it's a minor flaw in an otherwise exceptional adaptation.