I've mentioned before that I'm a big fan of Beverley Nichols, who is probably best known for his books about gardening such as Down the Garden Path, Merry Hall, Green Grows the City, and Garden Open Today. While I'm nowhere near as much as experienced as Mr. Nichols in the art of gardening, one of my favorite parts of summer is planning and planting annual flowers. Last year I shared photos of the results of that season's work, and this year I thought I'd do the same.

First of all, I should mention that this hasn't been an easy summer for the garden. Violent storms and excessive heat have taken their toll, and I lost a couple of plants as a result. One plant lost was a double begonia in a pot. Begonias are usually pretty drought- and heat-tolerant, so this was unusual--especially considering that I had two of them in the exact same location and only one died. Here's the remaining begonia, now flourishing in the backyard: 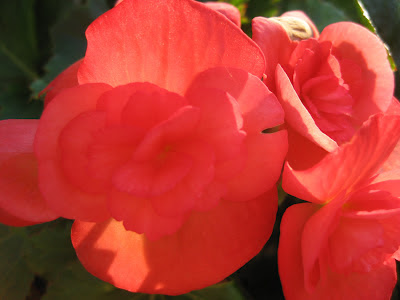 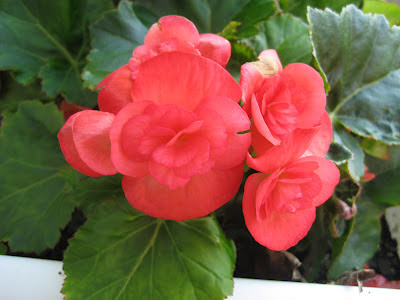 The color scheme this year was pink and red, partially inspired by these begonias. I love the look of the individual blossoms but I was disappointed at their slow growth rate and high ratio of foliage to flower, so I probably won't try these again.

The begonias were originally in pots flanking the front door, with pots of geraniums and bacopa next to them. The geraniums were salmon-pink but didn't make it through the heat, so now only the bacopa remains. 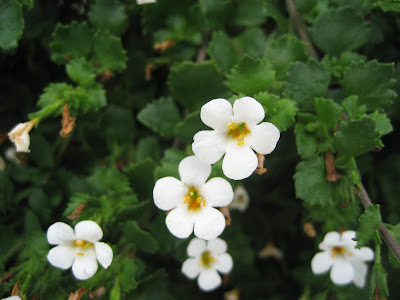 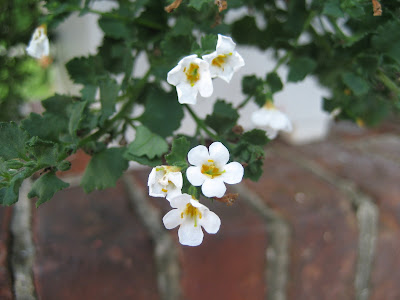 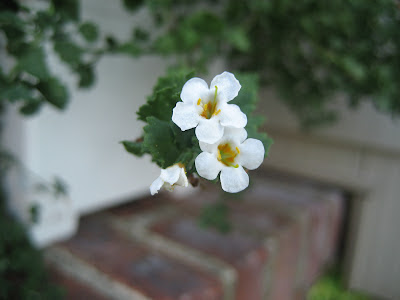 I like trailing flowers in pots, and the bacopa proved very easy to care for. It wilted once in very high heat but came right back. The white blossoms with their yellow centers are very pretty and don't need to be deadheaded, and the tiny leaves are delicately shaped.

We have one bed in the front of the house, with three spaces for planting annual flowers. This year, we originally put in salmon and white impatiens in all three spots but none of them took. Luckily we realized this early enough to swap them out for different plants. In the front space, we chose red wave petunias: 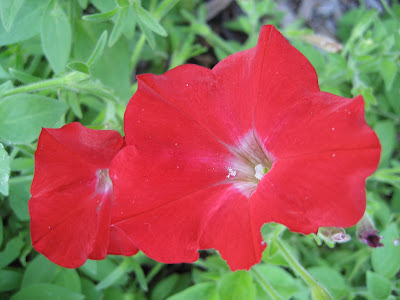 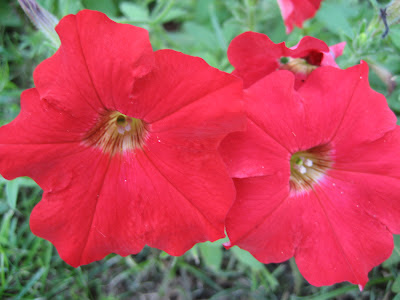 I was a little nervous about putting in petunias since they can be a little fussy, but the wave variety proved much easier to care for. Their stems and leaves are sturdier than ordinary petunias, which I think helped them to hold up in the hot weather we've been having. They do need to be deadheaded, but it hasn't proven too much of a chore so far.

We replaced the regular impatiens in the back two corners with double impatiens in coral and pink. I'm actually glad that the original impatiens failed to thrive, because the double variety are just so gorgeous and have been doing so well. Their blossoms look like miniature roses, but obviously these don't have thorns! 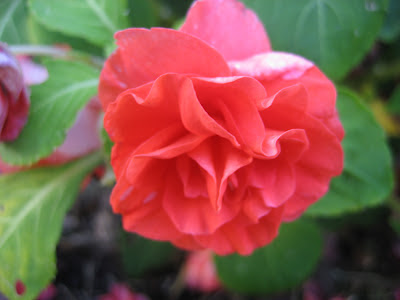 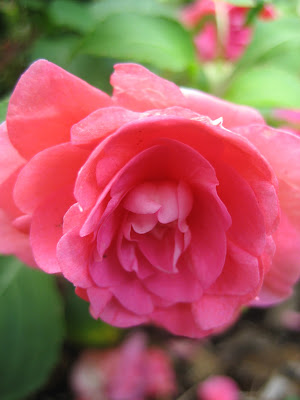 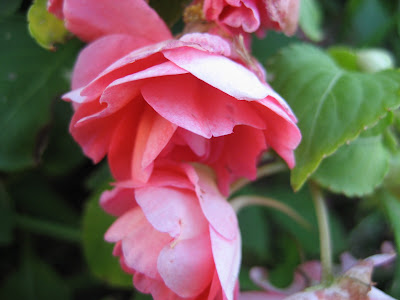 I love how these pictures turned out, and I have to restrain myself from putting in more. Overall, I'm pleased with this year's garden, even with all the troubles I've had. I'm looking forward to enjoying it through the rest of the summer, until it's time to look into icicle pansies, asters, and mums.