I saw this survey on Bryarly Bishop's blog and thought it looked like fun! I deliberately tried to avoid repeating the same movies too many times, so I didn't cross-list, say, My Fair Lady as both my favorite movie and a movie that made me happy. 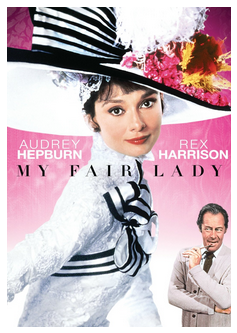 Your favorite movie:
My Fair Lady

The last movie you watched:
The Hunger Games

Your favorite action/adventure movie:
Indiana Jones and the Last Crusade

Your favorite horror movie:
The Others

Your favorite drama movie:
The Man Who Knew Too Much

A movie that makes you happy:
The Muppet Movie

A movie that makes you sad:
Little Women, 1994 (just the part where Beth dies; it's still one of my favorite movies!)

A movie that you know practically the whole script of:
The Muppet Christmas Carol

Your favorite director:
I don't pay much attention to directors, but I guess I'll go with Alfonso Cuaron because he did a great job with Harry Potter and the Prisoner of Azkaban and A Little Princess.

Your favorite movie from your childhood:
The Wizard of Oz

Your favorite animated movie:
Beauty and the Beast or The Aristocats

A movie that you used to hate but now love:
A Christmas Story--I find it funny now but I didn't always.

Your favorite quote from any movie:
Gonzo: "I told you, storytellers are omniscient; I know everything!"
--The Muppet Christmas Carol

The first movie you saw in theaters:
Snow White and the Seven Dwarfs, possibly? It was re-released when I was about three years old. I know I saw an animated version of The Princess and the Goblin when I was four.

The last movie you saw in theaters:
It was so long ago, but I think it was Harry Potter and the Sorceror's Stone, which my family and I saw in January of 2002. The movie theaters in my area are all pretty shoddy, so I prefer watching DVDs, Netflix streaming, and Amazon Instant Video.

The best movie you saw during the last year:
From Time to Time

A movie that disappointed you the most:
Winnie the Pooh. I was so looking forward to the movie, since it seemed like it would be a return to Milne's original stories, but the manic pace and slapstick humor ruined it for me.

The most overrated movie:
Casablanca

The most underrated movie:
I think The Muppet Christmas Carol is severely underrated by some hardcore Muppet fans.

Your favorite character from any movie:
Gonzo in The Muppet Movie, Muppet Christmas Carol, etc.

A movie that no one would expect you to love:
I think I come across like a girly-girl to most people, so I think people might be surprised to learn that I love a lot of action/adventure films like Ocean's 11 and Casino Royale.

A movie that is a guilty pleasure:
Labyrinth

Movie with the best soundtrack:
I love soundtracks, so this one's hard! I'll eliminate any musical soundtracks because most of my favorites come from movies that were originally Broadway shows, and narrow my picks down to Little Women and Harry Potter and the Prisoner of Azkaban.

Your least favorite movie:
I wasn't a big fan of Indiana Jones and the Kingdom of the Crystal Skull.