Recently, my sister Maureen contributed a great post about books for Doctor Who fans on the Sparrow Tree Square Blog. We're both fans of the show--she started watching first, and her descriptions of it intrigued me enough that I watched some clips on YouTube. Later when Netflix picked up the show, I watched almost all of series 1-5 of the 2005 reboot. I haven't yet seen series six or seven because the direction the show has taken hasn't thrilled me, but I'll probably give in and watch at least a couple of the newer episodes eventually.

I also haven't yet seen any episodes from Doctor Who's original run, from 1963 though 1989. I have seen clips, though, and as a knitter I was of course fascinated by the Fourth Doctor's famous long, stripey scarf. It went through many variations over the course of the Fourth Doctor's tenure, but ranged in length from nine feet to a whopping 26 feet!

Feeling up to the challenge, I decided to knit an authentic Fourth Doctor's scarf for Maureen for Christmas 2011. I went with the season 14 version, the shortest, partly because it best suited Maureen's height and partly because it was the least intimidating. I roughly followed this pattern from Witty Little Knitter in one of my favorite yarns, Vanna's Choice, but I made a few changes to the recommended colors. To my eye, wild berry was a better match for the purple than burgundy, and dusty green worked better for the green than olive.

I started knitting in October or November, and was finished by early December. I don't have a great photo of the finished product, but here are a couple of blurry nighttime shots taken just after I had finished adding the fringe: 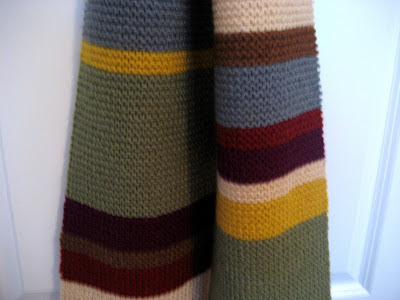 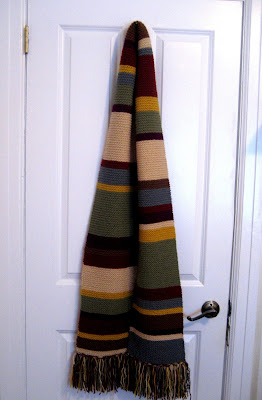 This past autumn I embarked on my second Doctor Who knitting project, this time inspired by the reboot. I loved Amy Pond's red lace scarf in "Vampires in Venice" and "Vincent and the Doctor," so I got myself a pattern and some yarn and gave it a shot. I'm pretty new to knitting lace, though, and the authentic pattern proved too complicated for me. I decided instead to pick a simpler lace pattern, the classic feather-and-fan/old shale, since I was more interested in having a similar look than having a costume replica. I'm not finished yet, as I'm working with smaller needles and a more complex pattern than the Fourth Doctor's scarf used, but there's no rush and I'm enjoying the process: 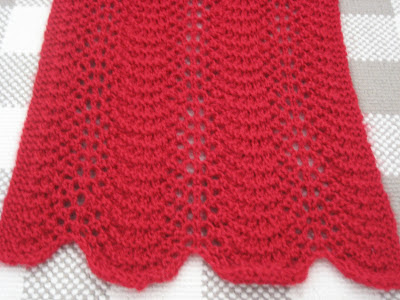 I also recently got a blue trench coat similar to the one Amy wears with her scarf. Mine's from Old Navy, and is a deep navy blue while Amy's is more teal in color. Again, I'm not going for an exact replica so much as an ensemble inspired by Amy's, and the navy works better with my wardrobe than the teal would.


I'm excited to wear both my coat and scarf together--perhaps if I pick up the pace I can get the scarf done in time for early spring!