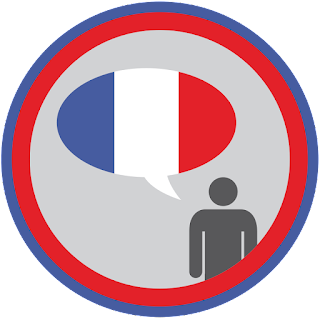 I started learning French when I started to homeschool, which was at age twelve. My first few years of schooling were spent in a private, Catholic school in Philadelphia, where they didn't teach foreign language to elementary school students. When my family moved to New Jersey, the public school system I attended taught Spanish. I switched to French when I started homeschooling, first and foremost because my mother was a French major in college and so was naturally well-equipped to teach that language. Still, I  probably would have picked to study French regardless of my mother's background, since I loved books like Madeline and Babar when I was growing up.

Later, when I started college at Villanova University, I tested into the highest possible level of French--but only because the online placement test didn't cover speaking and listening. I was always a strong reader in French and a decent writer, but my aural comprehension definitely lagged. I explained this to my adviser and was granted permission to drop down from Conversation and Composition I to Intermediate French II, where I muddled my way through to a decent grade largely because my professor used both English and French in her instructions. In the spring semester, though, I had to try Conversation and Composition again to fulfill my foreign language requirement and wound up withdrawing from the class after discovering that I simply could not follow an entire class session conducted in a foreign language.

This past summer I was diagnosed with auditory processing disorder, a problem with the way I process spoken language. I often explain APD to others as being like dyslexia for hearing, since more people seem to be familiar with dyslexia than APD. Many things are more difficult for me because of my APD than for those who hear normally, including understanding phone conversations, conversing over background noise, following lectures
. . . and learning a foreign language. No wonder I had such trouble with Conversation and Compositon!

Even though my French conversation skills will probably always be a little stilted due to my APD, I think that my knowledge of French language is sufficiently good to warrant my claiming this badge. If you need proof, check out the translation I did of "Compagnons de la Marjolaine" for Sparrow Tree Square!